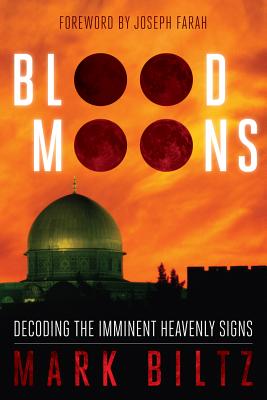 The sun shall be turned into darkness, and the moon into blood, before the great and the terrible day of the LORD come. Joel 2:31 From the beginning, in Genesis, God declared He specifically created the sun and the moon to be used for signs. These heavenly bodies would be used as signals of coming dramatic historical events when the Creator of the universe would intersect with human history. But how do we unlock the code to interpret the signals?   The key is found in the riveting new book, Blood Moons by Pastor Mark Biltz. In 2007 Pastor Biltz first discovered the correlation between when blood moons fell on feast days and key historical world events. He found the divine link between prophecy, heavenly signs, historical events, and when they intersect. Throughout history God, the Master Timekeeper, has used the heavenly bodies to communicate to us when significant events will happen. If you want to understand the timing of the Lord, you have to understand the seasons of the Lord, the feasts of the Lord, and the calendar of the Lord.  What are the feasts days? What is the difference between the biblical calendar and the one we use today? Why should you be concerned about eclipses in the sky? In Blood Moons Pastor Biltz answers these questions and more. He explains the importance of these biblical celebrations and milestones and shows how you too can be aware of the signs of things to come.

Mark Biltz, bestselling author of Blood Moons: Decoding the Imminent Heavenly Signs and founder of El Shaddai Ministries, is a well-known commentator on the feasts of the Lord who has spoken in South Africa, South Korea, Singapore, Israel, Sweden, Germany, Switzerland, Canada and throughout the United States. He has been interviewed by FOX television, appeared on the Sid Roth television broadcast, the Jim Bakker Show, the Jewish Voice, as well as on Prophecy in the News, and he was the first to discover the blood moon prophecies. Pastor Mark lives in Bonney Lake, Washington. Joseph Farah is best known as the founder of the first independent online news service, WorldNetDaily.com, now known as WND.com, more than 20 years ago. Previously he had served as editor-in-chief of major market dailies, investigative reporter and foreign correspondent. He is the author of more than a dozen books including his most recent in 2017, The Restitution of All Things: Israel, Christians and the End of the Age.