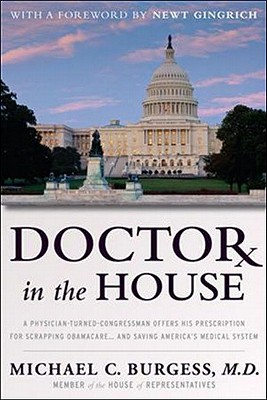 Doctor in the House

In 2010, the United States House of Representatives passed ObamaCare into law - an overt step away from liberty toward socialism. And while the powers at be claimed a sweeping victory bolstered by national pride, many saw what the legislation truly promised.

In Doctor in the House, Congressman Michael Burgess applies his three decades of experience working inside our nation's health care system to the diagnosis of our true ailments. In doing so, he offers a clear, common sense prescription for making our system more excellent, more efficient, and less expensive for all Americans. A third generation physician, Burgess writes with obvious passion for the healing arts and powerful convictions about the limits of government intervention in the doctor-patient relationship. Doctor in the House brings clarity and common sense to the perplexing national debate over the new health care bill.

After spending nearly three decades practicing medicine in North Texas, Congressman Michael C. Burgess, M.D., was first elected to Congress in 2002, and re-elected four times, most recently in 2010. During his time on Capitol Hill he has earned a reputation as a problem-solver who seeks sensible solutions to the challenges Americans face.
Loading...
or
Not Currently Available for Direct Purchase