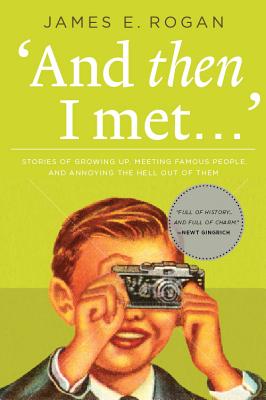 Stories of Growing Up, Meeting Famous People, and Annoying the Hell Out of Them

And Then I Met is a collection of humorous, adventurous, and sometimes poignant boyhood stories told by former Congressman James Rogan of doing everything possible, short of breaking the law, to meet and get advice from many famous politicians, sports and entertainment figures he met as a kid growing up in San Francisco.Through Rogan's diaries and photos, you'll meet and get rare behind-the-scenes glimpses of people like Harry Truman, John F. Kennedy, Ronald Reagan, Richard Nixon, Billy Graham, Bob Hope, Jimmy Stewart, Hubert Humphrey, Barry Goldwater, Cary Grant, Willie Mays, and dozens more.Rogan met everyone - from the last surviving witness of the massacre of General Custer to stars of Gone With the Wind and The Wizard of Oz. The stories and photographs brim over in this delightful compilation.

Praise For And Then I Met...: Stories of Growing Up, Meeting Famous People, and Annoying the Hell Out of Them…

"Rogan writes like a P.J. O'Rourke with a Capra-esque streak of political optimism, and this hilarious, crowd-pleasing memoir will probably make him a major conservative media celebrity." — Publisher's Weekly

James Rogan is a law professor, author, and a former Member of the United States House of Representatives from California. As a freshman member of the House Judiciary Committee, Rogan was chosen to help lead the prosecution in the impeachment and U.S. Senate trial of President Bill Clinton. Today he serves as a judge of the Superior Court of California.