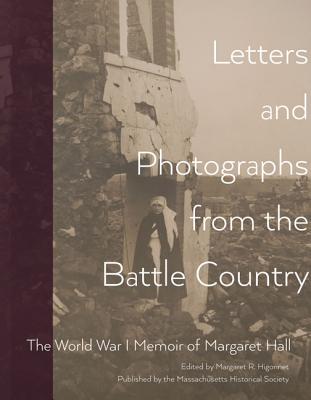 Letters and Photographs from the Battle Country

The World War I Memoir of Margaret Hall

In August 1918 a Massachusetts-born woman named Margaret Hall boarded a transport ship in New York City that would take her across the Atlantic to work with the American Red Cross in France, then in the devastating grips of the First World War. Working at a canteen at a railroad junction close to the Western Front, Hall aided both Allied and German soldiers. While there she was regularly forced to seek shelter from German bombardments. After the Armistice, Hall explored the destruction of the surrounding region; her diary entries, letters, and photos reveal a world of ruins and human remains.

After Hall returned to the United States, she wrote a memoir that she shared privately with friends and family. Published here for the first time, Hall's words offer a first-hand account of life on the Western Front in those last months of the war and its immediate aftermath. Balancing her deeply held convictions about the horror of this conflict with both wry humor and a sense of urgency, Hall's narrative gives the reader an unusually immediate and individualized testimony, one that rivals those of similar but better-known war memoirs, such as those by Vera Brittain and Edith Wharton.

The book features dozens of Hall's striking and never-before-published photographs, including of the movement of troops through town, women working just behind the front lines, and the landscape left when the war was "over." The pairing of Hall's remarkable images with her vivid reporting results in an invaluable, and uniquely personal, account of one of the most cataclysmic events in history.

Distributed for the Massachusetts Historical Society

Margaret R. Higonnet is Professor of English and Comparative Literature at the University of Connecticut and an Affiliate at Harvard University's Center for European Studies. She is the editor of Lines of Fire: Women Writers of World War I and Nurses at the Front: Writing the Wounds of the Great War.
Loading...
or support indie stores by buying on