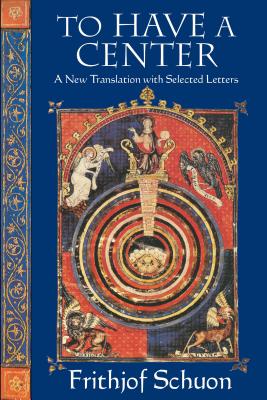 To Have a Center (Paperback)

A New Translation with Selected Letters

In this new edition of his powerfully original work, Schuon covers an array of metaphysical, cosmological, and anthropological subjects. In the book's signature essay, entitled "To Have a Center," the author surveys the ambiguous phenomenon of modern genius, showing how Western humanistic society has replaced the time-honored veneration of the saint and the hero with the cult of individualistic "genius." In other notable essays, Schuon deals with the relation between intelligence and character, the distinction between historical Gnosticism and pure gnosis, the degrees and dimensions of theism, the spiritual messages of David, Shankara, and Honen, and the symbolism of Plains Indian vestments. This revised edition, containing over 65 pages of new material, features a fully revised translation from the French original as well as previously unpublished selections from Schuon's letters and other private writings. Also included are editor's notes, a glossary of foreign terms, and an index.

Frithjof Schuon is best known as the foremost spokesman of the Perennial Philosophy and as a philosopher in the metaphysical current of Shankara and Plato. Schuon was born in 1907 in Basle, Switzerland, of German parents and died in the United States in 1998. Harry Oldmeadow was Coordinator of Philosophy and Religious Studies at La Trobe University Bendigo, Australia, until his recent retirement. He is a prolific and well-respected author on the Perennialist school of comparative religion. He lives in Australia.
or
Buy Here
(This book is on backorder)
Copyright © 2020 American Booksellers Association