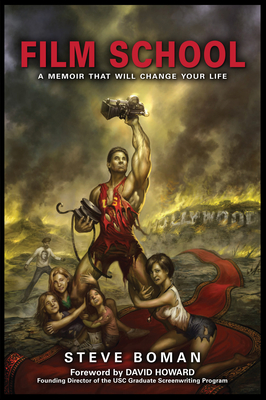 The True Story of a Midwestern Family Man Who Went to the Worlda's Most Famous Film School, Fell Flat on His Face, Had

One L meets You'll Never Eat Lunch in This Town Again In this comic and moving and completely true tale, Film School reveals what life is like at the elite school that trained Hollywood's biggest names. When Midwestern journalist Steve Boman applied to the University of Southern California's vaunted School of Cinematic Arts, the world's oldest and most prestigious film school, he had more than a few strikes against him: His wife was recovering from thyroid cancer. His beloved sister had just died of leukemia. He lost his job. He had three young children. He was in his late 30s.... And he had no experience in filmmaking. As Boman navigates his way through USC's arduous three-year graduate production program, he finds that his films fall flat, he's threatened with being kicked out of the program and he becomes the old guy no one wants to work with. Defeated, he quits and moves back to the Midwest to be with his family. After he is urged by his wife to reapply, he miraculously gets in for a second time...only to have a stroke on the first day of classes. But instead of doing the easy thing - running away again -- Boman throws caution to the wind and embraces the challenge. He slowly becomes a gray-haired Golden Boy at USC with films that sparkle. And then he does the impossible: While still in school, for a class project, he dreams up a television series that CBS catches wind of and develops into THREE RIVERS, a primetime Sunday night show. This story of challenge and triumph--and what it takes to make it in the world's most famous film school--is a must-read for anyone aspiring to become a Hollywood great or anyone just looking for a good story.

Steve Boman worked as a reporter for Minnesota Public Radio, The Philadelphia Inquirer and the Chicago Daily Southtown. He wrote stories for Chicago magazine, Salon.com, Advertising Age and others. He also worked as a liver transplant coordinator at the University of Chicago. In 2009, Boman graduated with an MFA in Film Production from the University of Southern California's School of Cinematic Arts. He developed a television series (CBS's THREE RIVERS) based on his experiences working as a transplant coordinator. He is married, with three daughters.

Praise For Film School: The True Story of a Midwestern Family Man Who Went to the Worlda's Most Famous Film School, Fell Flat on His Face, Had…

"Read Steve Boman's Film School to understand all the effort, heartbreak, creativity, begging, stealing, joy, backstabbing and stamina that it takes to make movies. Part exposé, part-American-Dream-come-true, Boman’s keenly observant and fascinating book takes the shine off of the glamour we know as Hollywood and shows us the real world of making movies.”
—Ali Selim, writer and director of SWEETLAND, 2007 Independent Spirit winner; director of episodes of IN TREATMENT, CRIMINAL MINDS