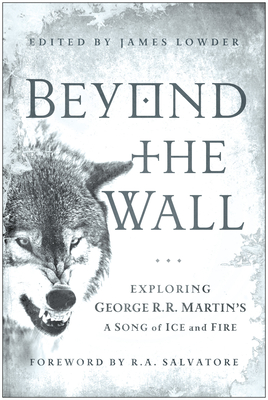 Exploring George R. R. Martin's A Song of Ice and Fire, From A Game of Thrones to A Dance with Dragons

The world created by George R.R. Martin in his high fantasy series A Song of Ice and Fire—now the basis for the hit HBO series Game of Thrones—is not only richly drawn, but also immensely popular. By A Game of Thrones' debut in May 2011, the series already had more than 6 million copies in print in the US and had sold more than 16 million worldwide. Since the television series' debut, A Game of Thrones and subsequent titles in the series have appeared consistently on the New York Times bestseller list. The latest title in the series, A Dance with Dragons, sold nearly 300,000 copies on its first day in print.

Beyond the Wall explores the book series' influences, its place in the fantasy pantheon, its challenging narrative choices, and the pull of its stunningly epic scope.

Praise For Beyond the Wall: Exploring George R. R. Martin's A Song of Ice and Fire, From A Game of Thrones to A Dance with Dragons…

"Beyond the Wall is a compelling read and provides plenty of food for thought when considering Martin's writing . . . If you're a fan of the Song of Ice and Fire series, give Beyond the Wall a look. It's well worth the time."
—GeekDad, Wired.com

"Beyond the Wall offers bracing takes on the ingrained sexism, brutal violence, and expectations for female characters in Westeros, while reminding readers that critical thinking is key . . . If you feel like some more insight into this crew of flawed, feral, fascinating characters will inform your [Game of Thrones] Season Three viewing, read on—and good luck putting it down."
—BiblioBitch, BitchMagazine.org

"A stunning array of talented creators and critics have been gathered into this scintillating essay collection of analysis/reactions to the world created by George R. R. Martin in A Song of Ice and Fire, and Game of Thrones."
—The Midwest Book Review

"The essays are fascinating and insightful, thoughtful and thought-provoking, and as a whole the collection presents the complexity, depth and richness of Martin's creation . . . Highly recommended."
—ScienceFictionWorld.com

"If anything, this book itself proves that the series has turned academicians on their heads. Geeks, we are finally being legitimized . . . Anyone who is a fan of [A Song of Ice and Fire] should absolutely own this book."
—Geekadelphia.com

"A great read for anyone who loves the books."
—TVOvermind.com

"Beyond the Wall leav[es] you with plenty of food for thought but also leav[es] you thirsting for more. It's a great temporary antidote to the long wait Game of Thrones fans are undergoing, both for the third season and for the sixth book in the series."
—TVRage.com

James Lowder has worked extensively on both sides of the editorial blotter. His bestselling, widely translated dark fantasy novels include Knight of the Black Rose and Prince of Lies, and his short fiction has appeared in such anthologies as Shadows Over Baker Street and The Repentant. As an editor he's helmed over a dozen anthologies, including Curse of the Full Moon and the recent Smart Pop collection Triumph of the Walking Dead, and has directed book lines or series with subjects ranging from Arthurian Britain to zombies. His nonfiction writing on film and comics has seen print in Amazing Stories, Sci-Fi Universe, and the Smart Pop collections King Kong Is Back! and The Unauthorized X-Men.
Loading...
or support indie stores by buying on