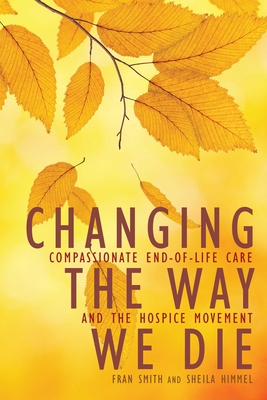 Changing the Way We Die

Compassionate End of Life Care and The Hospice Movement

There's a quiet revolution happening in the way we die. More than 1.5 million Americans a year die in hospice care--nearly 44 percent of all deaths--and a vast industry has sprung up to meet the growing demand. Once viewed as a New Age indulgence, hospice is now a $14 billion business and one of the most successful segments in health care. Changing the Way We Die, by award-winning journalists Fran Smith and Sheila Himmel, is the first book to take a broad, penetrating look at the hospice landscape.

Changing the Way We Die is a vital resource for anyone who wants to be prepared to face life's most challenging and universal event. You will learn:


Praise For Changing the Way We Die: Compassionate End of Life Care and The Hospice Movement…

"Changing The Way We Die is different from other end-of-life books in that its case studies are of real people - not composites - and that it sets the hospice movement in context, addressing its history and development in America."
-San Francisco Examiner

"Changing the Way We Die: Compassionate End-of-Life Care and the Hospice Movement should be required reading for physicians, nurses, and anyone else-professional or volunteer-who provides care to those who are dying."
-ForeWord Reviews

"Nobody wants to die badly." With that opening line, cowriters Smith and Himmel proceed to persuasively explain why no one should ever have to. . Smith and Himmel provide inspiring stories about patients, families, physicians, and the entire hospice experience.
-Booklist

"Two excellent journalists write about the history and the modern ways of the hospice movement."
-Regarding Arts

"As a former hospice volunteer, I am thrilled to recommend Changing the Way We Die. Finally there's a spotlight on a crucial conversation which has the potential to reduce the suffering of millions of people at the end of life. A must read for anyone with elderly parents as well as those who want to be choiceful about their own lives."
-MJ Ryan, author of Attitudes of Gratitude, The Power of Patience, This Year I Will....

"This beautiful book opens the lid on one of the most important treasures in our lives-how we can change the way we die. The book reminds us that we often can choose to enter the embrace of hospice, with its deep roots in the heart of compassionate care. Hospice in the United States has been a movement as well as a practice. Dedicated, sensitive professionals and volunteers bring love and care to those who are facing death, in their homes, hospital rooms, and freestanding hospices. The words of patients and hospice people that fill Changing the Way We Die reflect great wisdom and self-honesty."
-Joan Halifax, Ph.D, author of Being With Dying

Hospice is one of the truly humane innovations in our culture, and Changing the Way We Die not only shows why, it demonstrates the importance of treating death as part of the great mystery and privilege of being alive."
-From Sue Halpern, author, A Dog Walks into a Nursing Home

"There is nothing to be afraid of, within the pages of Changing the Way We Die, but there is a great deal to be learned. Using compelling stories about people from all walks of life, this book offers a preparatory primer for people contemplating the final chapter of life for themselves or their loved ones. It will also help those who struggle to understand the medical care that their loved ones received in their later days. And it provides a calm and persuasive case for greater compassion toward people who are seriously ill, and those who care for them. If you invest a few hours in reading this book, it will help you avoid months of suffering for people you love in the days to come."
-Stephen P. Kiernan, author, Last Rites: Rescuing the End of Life From the Medical System

"As one of the first volunteers with the San Francisco Hospice, as someone who speaks at hospice conferences on a regular basis, and, as someone whose wife died when there was no hospice care, I know about the hospice arena. I also know that this book is a gem in that world. With information about the hospice movement and personal heartwarming stories from providers, patients and their families, this insightful book will convince you that hospice is not about giving up but about getting the best, most compassionate care. A must-read for anyone dealing with end-of-life issues.-
Allen Klein, MA, CSP, author of Learning to Laugh When You Feel Like Crying: Embracing Life After Loss

Fran Smith is a writer, editor, writing coach, and communications consultant. Her work has appeared in O, The Oprah Magazine; Redbook; Salon; Good Housekeeping; Prevention; Health; the Los Angeles Times; USA Today, and dozens of other publications and websites. She has won many awards for medical reporting, health care investigations, and feature writing, and shared a Pulitzer Prize as a reporter at the San Jose Mercury News. Fran co-authored the first reporters' guidebook published by the Association of Health Care Journalists, and she is a frequent speaker on the power of storytelling, health care writing, and effective communications. A history buff, she is also the author of Breaking Ground: The Daring Women of the YWCA of the Santa Clara Valley, 1905 - 2005. (YWCA: 2005). She lives in New York.
Sheila Himmel is a Psychology Today blogger and co-author of Hungry: A Mother and Daughter Fight Anorexia (Penguin, 2009). She is a contributor to Restoring Our Bodies, Reclaiming Our Lives: Guidance and Reflections on Recovery from Eating Disorders (April 2011). Sheila writes for publications ranging from the New York Times to Eating Well to IEEE Spectrum: The Magazine of Technology Insiders. Her work has appeared in USA Today, the Washington Post, the Robb Report, M Magazine, and the online magazine Obit. As a restaurant critic of the San Jose Mercury News, Sheila won a James Beard Foundation Award for feature writing. She won awards from the Association of Food Journalists and the Associated Press News Editors Association, and uncovered fraud at a prominent Silicon Valley restaurant, revealing its longtime substitution of pork for veal. She lives in the San Francisco Bay Area.

Activist, anthropologist, author, caregiver, ecologist, LSD researcher, teacher, and Zen Buddhism priest -- Joan Halifax is many things to many people. Yet they all seem to agree that no matter what role she plays, Halifax is consistently courageous and compassionate. Halifax runs the Upaya Zen Center in New Mexico, a Zen Peacemaker community she opened in 1990 after founding and leading the Ojai Foundation in California for ten years. Her practice focuses on socially engaged Buddhism, which aims to alleviate suffering through meditation, interfaith cooperation, and social service.

As director of the Project on Being With Dying, Halifax has helped caregivers cope with death and dying for more than three decades. Her book Being With Dying helps clergy, community activists, medical professionals, social workers and spiritual seekers remove fear from the end of life. Halifax is a distinguished invited scholar of the U.S. Library of Congress and the only woman and Buddhist on the Tony Blair Foundation's Advisory Council. She resides in Santa Fe, New Mexico.