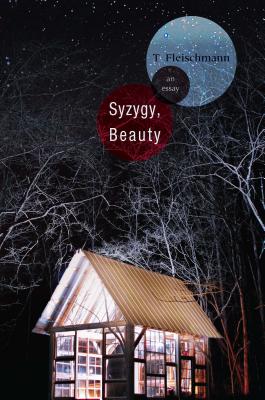 "T Fleischmann's Syzygy, Beauty shimmers with confidence as it tours the surreal chaos of gender, art, and desire. Its declarative sentences--seductive, abject, caustic, moving, informative, and utterly inventive--herald a new world, one in which we are blessedly 'here with outfits like strings of light and no future.' I hail its weirdness, its 'armpit frankess, ' its indelible portrait of occulted relation, and above all, its impeccable music."--Maggie Nelson

Construction becomes quiet, the saw buzz and the bang little white wisps that stop at my edges. We'll get used to most anything, at least enough to keep going. The will of the wisp. I want to poke a hole in my words so that people notice you are not here. Comfortable divots you could fill some day, if you wanted to. My mother sighs, my friends sigh. "You're so sad," they say. I'm not, I'm really not. I'm just trying to breathe fully. The shadow of the mountain turns with the day, encroaching. When it settles on me I put the hammer down and walk to where it is still warm.

In Syzygy, Beauty, T Fleischmann builds an essay of prose blocks, weaving together observations on art, the narrator's construction of a house, and a direct address to a lover. Playing with scale and repetition, we are kept off-center, and therefore always looking, as the speaker leads us through an intimate relationship that is complicated and deepened by multiple partners, gender transitions, and itinerancy.


Praise For Syzygy, Beauty: An Essay…

"In Syzygy, Beauty, T Fleischmann re-imagines the essay, creating a spare little book that reads like a collection of prose poems. Moving between anecdote and observation, fantasy and memory, it traces the story of a relationship or does it? For Fleischmann, ambiguity is the point, and the more we read, the more the lines here blur. 'By describing something,' he writes, 'we place it at a distance.'
David Ulin, Los Angeles Times

. . . a complex, tightly wound (and wounded) cri de coeur that is simultaneously accessible and intensely, cryptically personal. . . . One doesn’t need to catch every reference to leave jarred, changed by the encounter, though certainly you’d be rewarded for putting in the time, for reading with a pen, for trying to unearth the meaning you didn’t even know was there.”
Ethan Rutherford, Minneapolis Star Tribune

"Colliding memory, romance, self-awareness, and loss with pithy lightness and seriousness all at once, and composed in poetic fragments that range from a paragraph to a few sentences, this distinctive debut traces the past made alight by impact” through a diverse set of sources: film and carpentry analogies; interior monologues; references to artists Méret Oppenheim, Man Ray, Grayson Perry, and Louise Bourgeois; gnostic texts; and personal, yet ambiguous, disclosures."
--Karen Rigby, ForeWord Reviews

At its most basic, this unusual and engaging book describes the ins-and-outs of an unorthodox love affair, but it also functions as a sustained exploration of the ambiguities of love, gender, intimacy, and aesthetic possibilities. Fleischmann carves out a writing style somewhere between essay and poem, taking the reader through a series of vignettes that range from scenes of the affair, to meditations on Tracey Emin's Everyone I Have Ever Slept With, 1963-1995 (a tent appliqued with the names of everyone the artist had ever slept with [though not necessarily in a sexual sense]), to philosophical attempts to define the compromises of romantic partnership. Early on, Fleischmann declares that, "By describing something we place it at a distance," and this tension informs the stuttering action that follows. Attempting to describe the beloved and the act of loving, Fleischmann sets himself at a distance from both. He appears, unsurprisingly, as quite a lonesome narrator. The book, however, is engaging company. Its short passages are by turns smart and witty, but always carefully observed. Though certain passages are earnest to the point of tedium, the brief vignettes quickly give way to the next. Fleischmann asks tough questions about selfhood, love, and loneliness, and he provides some keen and fresh--if ultimately inconclusive--answers.
--Publishers Weekly

T Fleischmann lived by the Great Lakes until attending the University of Iowa and completing an MFA in Nonfiction Writing. Their essays have appeared in Fourth Genre, Pleiades, Indiana Review, Gulf Coast, and The Pinch, as well as in the feminist magazine make/shift, and have been Notable Essays in The Best American Essays, 2009 and 2010. A Nonfiction Editor at DIAGRAM, T has settled in rural Tennessee after traveling for several years across the United States.
Loading...
or
Not Currently Available for Direct Purchase