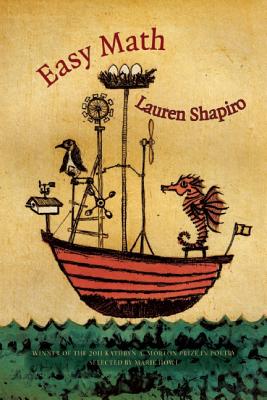 Selected by Marie Howe for the 2011 Kathryn A. Morton Prize, Easy Math is anxious and exuberant both. Lauren Shapiro's poems are Aesop stood on end, wry fables that defy our instinct to find a moral to the story. Instead, she offers us a gimlet eye to the disappointments of the world, tall tale-telling by turns rickety, defiant, and brave. "There are an infinite number of ways to torture the soul with hopefulness" Shapiro says, so we settle for ways to survive--crooked grins, twisted logic, and equations of jello shots, amusement parks, and post-it notes that never add up. "Everyone has something to say / about love and impermanence and waste." She says it better than most. Shapiro specializes in snappy, poignant retorts to the problems of pop culture. Joan Rivers, Lindsay Lohan, and even the wily Jersey Shore crew inhabit her crackling new volume of poems, winner of the Kathryn A. Morton Prize in Poetry.... Shapiro guides readers into uncomfortable but evocative settings, from a surreal ESL classroom and plague-ridden Marseilles to a hotel workout room. Imagination does not just take flight here; it rides the airport shuttle bus and connects travelers from different continents.
--Booklist

Lauren Shapiro can downshift from the sublime to the profane and back again in less than five seconds. Energy and joy create these metaphors, and if they are in discourse with postmodern malaise, they almost win the argument.
--Marie Howe


Praise For Easy Math (Kathryn A. Morton Prize in Poetry)…

Lauren Shapiro writes a smart, funny, richly inhabited poetry of the here and now. May it soon be everywhere and always.”
James Tate

"Full of vim and vinegar, these poems push our faces into their marvelous bouquets. Constantly refreshed with alarming strangeness, Easy Math veers between irked humor and world-weary awe. Remember when we all got out of school for the fire alarm? This is even better."
Dean Young

"Lauren Shapiro can downshift from the sublime to the profane and back again in less than five seconds. Energy and joy create these metaphors, and if they are in discourse with postmodern malaise, they almost win the argument."
Marie Howe

This fearless poet isn’t afraid to name something beautiful. And she's not shy about how we humans have thoughts, opinions and feelings; she brings an astonishingly acute precision to bear on so many of our less than perfect ways. She registers our misapprehensions and turns our imaginations up several registers. I love reading this book, and getting to know this poet.”
Dara Wier

Lauren Shapiro received a B.A. in Comparative Literature from Brown University and an M.F.A. in Poetry from the Iowa Writers' Workshop. She is a former associate acquiring editor at the Yale University Press and has translated poetry from Spanish, Italian, Vietnamese, and Arabic into English. Her poems have been published in such journals as "Pool, Passages North, 32 Poems, Forklift, Ohio, Drunken Boat, notnostrums," and "Thermos." She is a curator of the Monsters of Poetry Reading Series and an assistant editor at Rescue Press. She lives and teaches in Madison, Wisconsin.
Loading...
or support indie stores by buying on