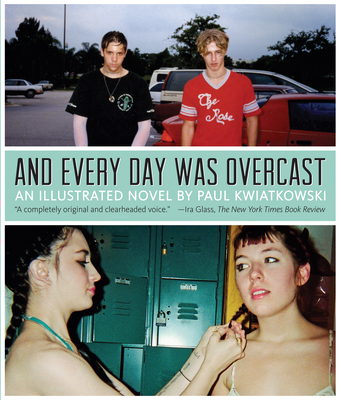 And Every Day Was Overcast (Paperback)

"This illustrated novel about growing up poor near the swamps of South Florida has a lurid vibrancy."--New York Times, Holiday Gift Guide, Dwight Garner "A completely original and clearheaded voice."--Ira Glass, host of This American Life "We finish And Every Day Was Overcast in a delirious state of disassociation, not unlike the kids whose lives it seeks to evoke. . . The shabby suburbs of South Florida] may not be unknown to us, but Kwiatkowski's ruthless excavation give us a new language by which we hear stories that might otherwise go unheard."--The Los Angeles Times, David Ulin "This is a dark and uplifting, visceral and thoughtful, frightening and refreshingly honest book." - High Times Photo-Eye Best Books of 2013 (Selected by Doug Rickard)
"A tale of trailer parks, drugs and teenage construction and destruction, Paul K has brought forth an American diary hugely personal and partially universal. Through skillfully written prose and raw imagery that's authored, found and stolen, we witness the protagonist's young life on display. It's not pretty nor should it be. A scrapbook of intention and carefully put together pieces, we witness elation and pain and the special concoction of America's 'Florida' in all its glory." "Kwiatkowski's novel succeeds in doing much more than simply conveying the isolated experiences of one idle teenager with a penchant for drugs, pornography and reckless sexual encounters. Through a marriage of images and words, the novel illustrates the result of adolescent malaise against Florida's eerie, subtropical backdrop."--Fault Magazine "And Every Day Was Overcast available in paper form, digital form and as unique iPad edition (with accompanying soundtrack), is an autobiographical and exhilarating pursuit of the author's adolescence in the gritty suburban South Florida of the 1990s . . Our new favorite NSFW coffee table book."--I Love Fake Magazine "With aesthetic conviction comparable to that of Harmony Korine, this alternative novel is sure to have you nostalgic and reaching for the cheapest brand of beer you ever got your teenage hands on."--Nylon "I can count on my fingers the number of great books that seamlessly mix photographs and literary text in a compelling way. Paul Kwiatkowski's And Every Day is Overcast not only achieves this rare feat, he does so with an artistry that makes the achievement nearly invisible. . . A landmark in visual storytelling."--Alec Soth Out of South Florida's lush and decaying suburban landscape bloom the delinquent magic and chaotic adolescence of And Every Day Was Overcast. Paul Kwiatkowski's arresting photographs amplify a novel of profound vision and vulnerability. Drugs, teenage cruelty, wonder, and the screen-flickering worlds of Predator and Married...With Children shape and warp the narrator's developing sense of self as he navigates adventures and misadventures, from an ill-fated LSD trip on an island of castaway rabbits to the devastating specter of HIV and AIDS. This alchemy of photography and fiction gracefully illuminates the travesties and triumphs of the narrator's quest to forge emotional connections and fulfill his brutal longings for love. Paul Kwiatkowski is a New York-based writer and photographer. This is his first novel. His work has appeared in numerous outlets, including Juxtapoz, Beautiful Decay, Dazed and Confused, Fault, Dust, and American Suburb X.

Paul Kwiatkowski is a New York-based writer and photographer. This is his first novel. His work has appeared in numerous outlets, including Juxtapoz, Beautiful Decay, Dazed and Confused, Fault, Dust, and American Suburb X.
or support indie stores by buying on
Copyright © 2020 American Booksellers Association