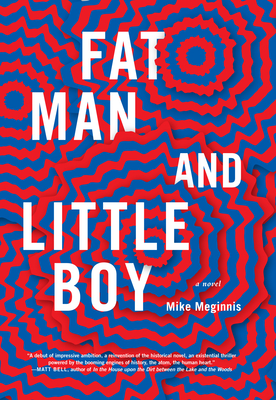 Two bombs over Japan. Two shells. One called Little Boy, one called Fat Man. Three days apart. The one implicit in the other. Brothers. Named one of Flavorwire's best independent books of 2014, and winner of the 2013 Horatio Nelson Fiction Prize. In this striking debut novel, the atomic bombs dropped on Japan are personified as Fat Man and Little Boy. This small measure of humanity is a cruelty the bombs must suffer. Given life from death, the brothers' journey is one of surreal and unsettling discovery, transforming these symbols of mass destruction into beacons of longing and hope. Impressive. . . The novel straddles a hybrid genre of historical magical realism. --The Japan Times Meginnis's talent is his ability to make the reader feel empathy for souls who killed so many. . . Many pages in this novel feel like engravings . . . Meginnis has written one of the best, most natural novels about the atomic bombs. --Nick Ripatrazone, The Millions An] imaginative debut. . . Meginnis' story is both surprising and incisive. --Publishers Weekly

Mike Meginnis was named one of the year's most impressive debut novelists by the 2014 Brooklyn Book Festival. He has published stories in Best American Short Stories 2012, The Collagist, PANK, and many others. He contributes regularly to HTML Giant and Kill Screen, and plays collaborative text adventures at exitsare.com. He earned his MFA at New Mexico State University, where he served as a managing editor of Puerto del Sol for two years. He now lives and works in Iowa City, where he operates Uncanny Valley Press with his wife, Tracy Rae Bowling. He has never seen the ocean.
Loading...
or
Not Currently Available for Direct Purchase