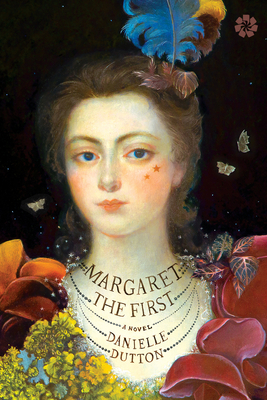 “Dutton's novel takes the already extraordinary life of Margaret Cavendish - 17th century natural philosopher, author of The Blazing World, and Duchess of Newcastle -- and transforms it into a stunning work of historical fiction. With women in the sciences a hot issue today, Margaret the First satisfies a craving for women's writing, women's voices, and women's stories, painting a portrait of a sensitive, thoughtful woman hungry not just for praise and recognition, but acknowledgment, affirmation, and validation. Margaret the First is a triumph!”
— Liz Wright (W), Brazos Bookstore, Houston, TX
View the List

“The duchess herself would be delighted at her resurrection in Margaret the First...Dutton expertly captures the pathos of a woman whose happiness is furrowed with the anxiety of underacknowledgment.” —Katharine Grant, The New York Times Book Review

Margaret the First dramatizes the life of Margaret Cavendish, the shy, gifted, and wildly unconventional 17th–century Duchess. The eccentric Margaret wrote and published volumes of poems, philosophy, feminist plays, and utopian science fiction at a time when "being a writer" was not an option open to women. As one of the Queen's attendants and the daughter of prominent Royalists, she was exiled to France when King Charles I was overthrown. As the English Civil War raged on, Margaret met and married William Cavendish, who encouraged her writing and her desire for a career. After the War, her work earned her both fame and infamy in England: at the dawn of daily newspapers, she was "Mad Madge," an original tabloid celebrity. Yet Margaret was also the first woman to be invited to the Royal Society of London—a mainstay of the Scientific Revolution—and the last for another two hundred years.

Margaret the First is very much a contemporary novel set in the past. Written with lucid precision and sharp cuts through narrative time, it is a gorgeous and wholly new approach to imagining the life of a historical woman.

"In Margaret the First, there is plenty of room for play. Dutton’s work serves to emphasize the ambiguities of archival proof, restoring historical narratives to what they have perhapsalways already been: provoking and serious fantasies,convincing reconstructions, true fictions.”—Lucy Ives, The New Yorker

“Danielle Dutton engagingly embellishes the life of Margaret the First, the infamousDuchess of Newcastle–upon–Tyne.” —Vanity Fair

Praise For Margaret the First: A Novel…

Literary Hub, 1 of the 20 Best Novels of the Decade

"The duchess herself would be delighted at her resurrection in Margaret the First . . . Dutton expertly captures the pathos of a woman whose happiness is furrowed with the anxiety of underacknowledgment . . . [She] surprisingly and delightfully offers not just a remarkable duchess struggling in her duke's world but also an intriguing dissection of an unusually bountiful partnership of (almost) equals." —Katharine Grant, The New York Times Book Review

"This slender but dense imagining of the life of Margaret Cavendish, a pioneering 17th–century writer and wife of the aristocrat William Cavendish, could be classified as a more elliptical cousin of Hilary Mantel's Thomas Cromwell novels . . . Ms. Dutton's style is tightly poetic. 'It was indescribable what she wanted,' she writes of Margaret. 'She wanted to be 30 people . . . To live as nature does, in many ages, in many brains.'" —John Williams, The New York Times

"Although Margaret the First is set in 17th century London, it's not a traditional work of historical fiction. It is an experimental novel that, like the works of Jeanette Winterson, draws on language and style to tell the story . . . There is a restless ambition to [Danielle Dutton's] intellect."—Michele Filgate, The Los Angeles Times

"Margaret Cavendish (1623–73) did something that was vanishingly rare for women in 17th–century England: She became a famous writer . . . This is the story Danielle Dutton tells in her beguiling biographical novel Margaret the First . . . The loveliest aspect of this novel is its gentle, wondering portrayal of the Cavendish marriage. William, a poet and patron of the arts, encourages his wife's ambitions even as they bring notoriety upon the household . . . Margaret laments when told of the scandal her writing provokes. Yet this inimitable woman made her reputation anyway, and Ms. Dutton's novel charmingly enhances it." —Sam Sacks, The Wall Street Journal

"Dutton's Duchess . . . exists, in this book, as a study in textual vestiges, as much palimpsest as person . . . There are vivid, episodic bursts of narration, recounting a birthday party, the teasing of her by siblings, and Margaret's time at court in Oxford, after the revolution interrupted her aristocratic family's bucolic life . . . In Margaret the First, there is plenty of room for play. Dutton's work serves to emphasize the ambiguities of archival proof, restoring historical narratives to what they have perhaps always already been: provoking and serious fantasies, convincing reconstructions, true fictions." —Lucy Ives, The New Yorker

"With refreshing and idiosyncratic style, Dutton portrays the inner turmoil and eccentric genius of an intellectual far ahead of her time." —Jane Ciabattari, BBC

"This vivid novel is a dramatization of the life of 17th–century Duchess Margaret Cavendish . . . While the novel takes place in the 1600s, the explorations of marriage, ambition, and feminist ideals are timeless." —The Boston Globe

"What an excellent subject on which to hang a novel . . . Dutton's literary voice is unusual, and arresting." —Sarah Murdoch, Toronto Star

"Dutton refreshes Cavendish's words for a contemporary audience, rendering them relevant and powerful once more." —Megan Burbank, The Portland Mercury

"Conjured in a prose at once lush and spare —so precise and yet so rich in observation —Danielle Dutton's Margaret is a creature exquisitely of her own creation, who can tell herself, and perhaps believe, that she 'had rather appear worse in singularity, than better in the Mode.'"—Ellen Akins, The Minneapolis Star Tribune

"A perfect dagger of book: sharp, dark sentences, in and out quick." —Jonny Diamond, Literary Hub

"Layered and engrossing. . . Dutton's profile constructs [Margaret] as a fully formed, complicated human being, as a woman whose interests and inclinations stem from a complex personal history. It's this profile that's the star of the novel as much as its subject, since it deftly weaves together primary and secondary sources to form a wholly integrated, believable and gripping account of a woman who didn't belong to the times in which she was born, not least because these times were too volatile for her to ever plant herself in them."—Electric Literature

"Dutton's remarkable second novel is as vividly imaginative as its subject, the 17th–century English writer and eccentric Margaret Cavendish . . . Though Dutton doesn't shy away from the 'various and extravagant; antics (such as attending the theater in a topless gown) that earned her subject notoriety and the nickname 'Mad Madge,' her Margaret is a woman of fierce vitality, creativity, and courage. Incorporating lines from Cavendish herself as well as Virginia Woolf, whose essays introduced Dutton to Cavendish, this novel is indeed reminiscent of Woolf's Orlando in its sensuous appreciation of the world and unconventional approach to fictionalized biography. Dutton's boldness, striking prose, and skill at developing an idiosyncratic narrative should introduce her to the wider audience she deserves."—Publishers Weekly, starred review

"Despite its period setting and details, this novel —more poem than biography —feels rooted in the experiences of contemporary women with artistic and intellectual ambitions. Margaret's alternating bursts of inspiration and despair about her work may feel achingly familiar to Dutton's likely readers, many of whom will probably also be aspiring writers."—Kirkus Reviews

"Indebted to Virginia Woolf in both content and form, Dutton examines the life of a woman who upended social norms by being intelligent, imaginative, and ambitious without apology. Cavendish's intellectual and personal growth are explored with sensitivity in poetic prose style. This short literary book offers big rewards to readers interested in the complex mind of a woman ahead of her time."—Sarah Cohn, Library Journal

Danielle Dutton’s fiction has appeared in magazines such as Harper’s, BOMB, Fence, and Noon. She is the author of a collection of hybrid prose pieces, Attempts at a Life, which Daniel Handler in Entertainment Weekly called "indescribably beautiful," and an experimental novel, S P R A W L, a finalist for the Believer Book Award. In 2015, she wrote the texts for Here Comes Kitty: A Comic Opera, an artists’ book with collages by Richard Kraft.

Dutton holds a PhD in Literature and Writing from the University of Denver, an MFA from The School of the Art Institute of Chicago, and a BA in History from the University of California at Santa Cruz. Prior to her current position on the creative writing faculty at Washington University in St. Louis, she taught in the Jack Kerouac School of Disembodied Poetics at Naropa and was the book designer at Dalkey Archive Press.

In 2010, Dutton founded the small press Dorothy, a publishing project, named for her great aunt Dorothy Traver, a librarian who drove a bookmobile through the back hills of southern California. Now in its fifth year, the press’s books are widely reviewed. The press itself has been praised in the New York Times and Chicago Tribune, and Dutton has been interviewed in the Paris Review, Kirkus, and elsewhere for her work promoting innovative women writers.
Loading...
or support indie stores by buying on