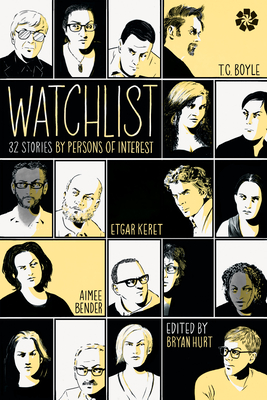 32 Stories by Persons of Interest

“Including work by literary heavy–hitters... the anthology considers the act and weight of watching and being watched... and in Watchlist, these see–to–know quests range from funny to terrifying.” —Los Angeles Magazine

In Watchlist, some of today’s most prominent and promising fiction writers from around the globe respond to, meditate on, and mine for inspiration the surveillance culture in which we live. With contributions from Etgar Keret, T.C. Boyle, Robert Coover, Aimee Bender, Jim Shepard, Alissa Nutting, Charles Yu, Cory Doctorow, and many more, WATCHLIST unforgettably confronts the question: What does it mean to be watched?

In Doctorow’s eerily plausible ""Scroogled,"" the US has outsourced border control to Google, on the basis that they Do Search Right. In Lincoln Michel’s “Our New Neighborhood,” a planned suburban community’s ‘Neighborhood Watch’ program becomes an obsessive nightmare. Jim Shepard’s haunting “Safety Tips for Living Alone” imagines the lives of the men involved in the US government’s fatal attempt to build the three Texas Tower radar facilities in the Atlantic Ocean during the Cold War. Randa Jarrar’s “Testimony of Malik, Israeli agent #287690” is “a sweet and deftly handled story of xenophobia and paranoia, reminding us that such things aren’t limited to the West” (Sabotage Reviews) and Alissa Nutting’s “The Transparency Project” is a creative, speculative exploration of the future of long–term medical observation.

By turns political, apolitical, cautionary, and surreal, these stories reflect on what it’s like to live in the surveillance state.

Praise For Watchlist: 32 Stories by Persons of Interest…

“Writers like T.C. Boyle and Cory Doctorow contributed to this surreal anthology of short stories that riff on our modern surveillance culture.” —Entertainment Weekly

“Including work by literary heavy–hitters... the anthology considers the act and weight of watching and being watched... and in Watchlist, these see–to–know quests range from funny to terrifying.” —Los Angeles Magazine

“Smart, eclectic and carefully observed, this collection illuminates the darker corners within our culture and within our private lives.” —San Francisco Chronicle

“What Jonathan Lethem did for amnesia in his anthology The Vintage Book of Amnesia, Bryan Hurt does for surveillance with Watchlist — a genre of speculative fiction is firmly established. In Aimee Bender’s “Viewer, Violator,” a painting seems to be watching the head of a museum. T.C. Boyle’s “The Relive Box” is about a device that lets you revisit episodes of your life – and nobody gets any more work done. In Cory Doctorow’s “Scroogled,” everything that you fear happening online. . . is happening. Fortunately, if you close the paperback, the stories can’t see you. Maybe. I think.” —The National Post

“A brave and necessary set of early flares of the literary imagination into the Panopticon we all find ourselves living inside these days.” —Jonathan Lethem

“A boldly imaginative, diverse collection of 32 surveillance–themed stories from an international coterie of writers. . . . The varied cross–section of material is stylishly captured by each writer’s distinct voice and perspective.” —Publishers Weekly

“In this diverse and daring fiction collection, writers of all stripes deal with the act of watching and being watched, subverting and challenging surveillance’s obvious connotations and raising questions about our intricate dance with privacy and transparency.” —Shelf Awareness

“In this anthology, smart and slightly edgy fiction writers explore what it means to be both the watcher and the watched – and sometimes both simultaneously.” —The National Book Review, "5 Hot Books"

Bryan Hurt is author of Everyone Wants to Be Ambassador to France (Starcherone Books, September 2015), winner of the Starcherone Prize for Innovative Fiction. His stories and essays have been published in The American Reader, Guernica, The Kenyon Review Online, the Los Angeles Review of Books, Tin House, TriQuarterly, and many others. He teaches creative writing at St. Lawrence University in upstate New York.
Loading...
or
Not Currently Available for Direct Purchase