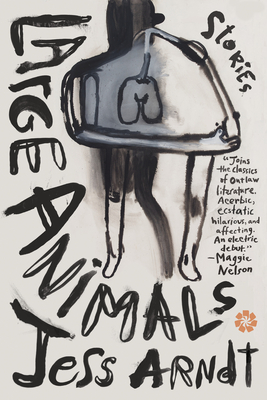 “Jess Arndt’s Large Animals is wildly original, even as it joins in with the classics of loaded, outlaw literature. Acerbic, ecstatic, hilarious, psychedelic, and affecting in turn, this is an electric debut.” —Maggie Nelson, National Book Critics Circle Award–winning author of The Argonauts

Jess Arndt's striking debut collection confronts what it means to have a body. Boldly straddling the line between the imagined and the real, the masculine and the feminine, the knowable and the impossible, these twelve stories are an exhilarating and profoundly original expression of voice. In “Jeff,” Lily Tomlin confuses Jess for Jeff, instigating a dark and hilarious identity crisis. In “Together,” a couple battles a mysterious STD that slowly undoes their relationship, while outside a ferocious weed colonizes their urban garden. And in “Contrails,” a character on the precipice of a seismic change goes on a tour of past lovers, confronting their own reluctance to move on.

Arndt’s subjects are canny observers even while they remain dangerously blind to their own truest impulses. Often unnamed, these narrators challenge the limits of language—collectively, their voices create a transgressive new formal space that makes room for the queer, the nonconforming, the undefined. And yet, while they crave connection, love, and understanding, they are constantly at risk of destroying themselves. Large Animals pitches toward the heart, pushing at all our most tender parts—our sex organs, our geography, our words, and the tendons and nerves of our culture.

“Jess Arndt’s Large Animals is wildly original, even as it joins in with the classics of loaded, outlaw literature. Acerbic, ecstatic, hilarious, psychedelic, and affecting in turn, this is an electric debut.” —Maggie Nelson, National Book Critics Circle Award–winning author of The Argonauts

"Reading Arndt is like walking toward a shimmering desert mirage and being met with a cloud of acid instead of an oasis of cool water. . . . A deeply transgressive, riveting shot out of the gate. Arndt is one to watch."" —Kirkus Reviews

""Arndt’s short stories are delicious flights of fancy, or obsession, or fertile curiosity—or, more accurately, some beguiling combination of all three...This is a playful and provocative collection, full of sly, deft turns of phrase and striking imagery."" —Publishers Weekly

“Arndt’s vivid, rollicking stories represent a new kind of American outlaw literature, of transgression and nonconformity and queerness and heart, all told in a propulsive, original voice.” —Literary Hub

"The stories and the characters within defy description and deal with identity, gender dysphoria, and body dysmorphia. They’re stories for anyone who refuses to conform, or struggles with a changing personal narrative, to the point where even language can barely express the way they feel. Often hallucinatory, sometimes transgressive, usually queer, and always human, these stories about bodies go straight for the heart." —Brit + Co

"Strange, smart, and probing... an important voice on timely questions of the body politic."—Elle

Large Animals is in the bite.” —Justin Torres, author of We the Animals

“Jess Arndt has crafted a queer uncanny, an eerily recognizable landscape of dark magic and darker humor where the instability of bodies, desire, relationships, and the self take on a supernatural dimension. A tremendously exciting collection.” —Michelle Tea, author of Black Wave

“Metamorphosis—of time, of space, of character—is exposed in every playful sentence of Large Animals. Language will not be kept in its form. Life, poetry, gender are always in the process of transformation, and this fundamental condition is at the heart of Jess Arndt’s stories. Large Animals is a strange and beautiful must–read.” —Dorthe Nors, author of Karate Chop and So Much for That Winter

"[Arndt's] stories don’t map with the intention of revealing a destination, but rather at illuminating the nebulous territory that precedes it." —The East Bay Review

"Jess Arndt’s writing is so strange and imaginative that it provides release from the real world."—Dayna Evans, The Cut

JESS ARNDT received her MFA at the Milton Avery Graduate School of the Arts at Bard College, and was a 2013 Graywolf SLS Fellow and 2010 Fiction Fellow at the New York Foundation of the Arts. Her writing has appeared in Fence, Bomb, Aufgabe, Parkett, and Night Papers, and in her manifesto for the Knife’s Shaking the Habitual world tour. She is a co–founder of New Herring Press, dedicated to publishing prose and polemics. She lives and works in Los Angeles.
Loading...
or
Not Currently Available for Direct Purchase