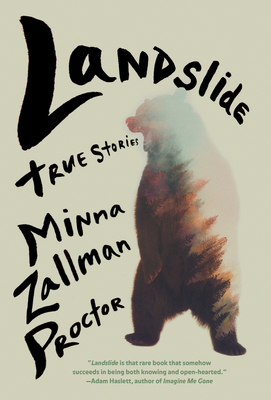 “Landslide is that rare book that somehow succeeds in being both knowing and open–hearted, both formally sly and emotionally direct. Its timeless subjects—grief, storytelling, the giving up of childish things—are rendered in ways that are as movingly honest as they are probing and unfamiliar. A swift, compelling read.” —Adam Haslett, author of Imagine Me Gone

Minna Zallman Proctor's Landslide is a captivating collection of interconnected personal essays. These “true stories” explore the author’s complicated relationship with her mother—who was diagnosed with cancer at age fifty–seven and died fifteen years later—and the ways in which their connection was long the “prime mover” of Proctor’s life, the subtle force coursing beneath her adulthood. As such, these vibrant essays also narrate the trials and triumphs of Proctor’s own life—shifting between America and Italy (and loving “being a foreigner, the constant sense of unfamiliarity that supplanted all of my expectations and disappointments”), her bumpy first marriage, the profound pleasure she takes in motherhood, and the confounding experience of trying to arrange a Jewish burial for her “Jewish, not quite Jewish” mother.

Proctor has an integrity and humor that is never extinguished despite life’s mounting difficulties. She also slyly questions her own narrative throughout. “Not having told this story before means I never fixed many details in my memory,” she writes. “[I] have to rely on flashes, the transparent stills that hang in my mind, made of smell, the way the light casts, the wind on skin.” The essays in this book are a sharply intelligent exploration of what happens when death and divorce unmoor you from certainties, and about the unreliable stories we tell ourselves, and others, in order to live.

"Proctor's essays fold time in on itself in order to explore the ways in which past and present overlap and merge." —NPR

"Proctor is a devastatingly honest and unruly writer who tackles the big stuff . . . you should buy this book if you like good, smart things." —Jennifer Romolini, Shondaland

"[Zallman] has crafted an affecting elegy for a complicated and contradictory mother and an insightful ode to the unknowable." —Publishers Weekly

"Stories matter, memory is tricky, the past permeates us: these and other insights appear continually in a collection of interwoven personal essays. . . . Throughout, the author remains candid about herself. . . . Affecting stories told effectively, with all the complications involved in searching for truth." —Kirkus Reviews

“It’s the avoidance of tidy explanations and obvious themes that make Proctor’s writing feel so real, and significance, when she chooses to instill it, seem so meaningful.” —Booklist

“The large leaps of story and the way it comes back to itself in such sudden turns is enough to take your breath away, but Proctor is the master of such quick turns and delightfully distant juxtapositions. . . . the sort of book to read and reread.”—Scott Russell Morris, New Pages

“Landslide is that rare book that somehow succeeds in being both knowing and open–hearted, both formally sly and emotionally direct. Its timeless subjects—grief, storytelling, the giving up of childish things—are rendered in ways that are as movingly honest as they are probing and unfamiliar. A swift, compelling read.”—Adam Haslett, author of Imagine Me Gone

"Minna Proctor's voice recalls Vivian Gornick and Rachel Cusk. I know of no one writing more bravely and acutely about the intricate bonds of family, and the ways that we wound and heal the ones closest to us. The reader is left craving more time in the narrator's calm, authoritative presence, which redeems the world even as she reveals its heartbreaking cruelty."—Emily Gould, author of Friendship

"Landslide is candid, moving, and wholly original: The beauty of Proctor’s prose is matched by the depth of her insights into life and literature, love and loss."—Rosie Schaap, author of Drinking With Men: A Memoir

"No one who is telling you a story is trying to be alone, Proctor writes, and what great company she is as she darts and dives into the beautiful wreck of a brilliantly adventurous life."—Jenny Offill, author of Dept. of Speculation

Minna Zallman Proctor is a writer, critic, and translator who currently teaches creative writing at Fairleigh Dickinson University, where she is also editor in chief of The Literary Review. She is also the author of Do You Hear What I Hear? An Unreligious Writer Investigates Religious Calling and has translated eight books from Italian, including Fleur Jaeggy’s These Possible Lives (forthcoming from New Directions in July 2017). She lives in Brooklyn.
Loading...
or support indie stores by buying on