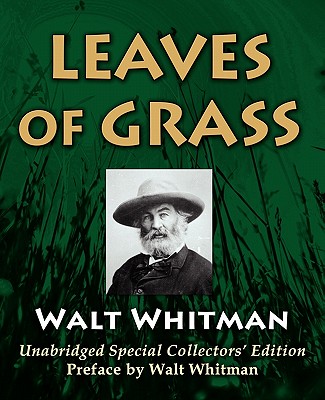 NMD Books is proud to publish this complete and unabridged Special Collectors Edition of the final "Deathbed Version" of Walt Whitman's literary classic, "Leaves Of Grass." (1892), and includes a Preface to the original 1855 Edition by Whitman himself. Leaves of Grass has its genesis in an essay called The Poet by Ralph Waldo Emerson, published in 1845, which expressed the need for the United States to have its own new and unique poet to write about the new country's virtues and vices. Whitman, reading the essay, consciously set out to answer Emerson's call as he began work on the first edition of Leaves of Grass. Few works of literature have as controversial and difficult a history. Unable to find a publisher willing to take on his pioneering and unusual work, he initially self-published it in 1855. Throughout it's turbulent history, the book was both praised and reviled by critics, many of whom took issue with its occassional emphasis on sensuality and references to same-sex attraction, something that was considered taboo during the mid-to-late 1800's. Eventually, 'Leaves of Grass' was accepted as a groundbreaking and innovative work of literary art, one which inspired other poets to express more universal themes of love, attraction, and stream-of-consciousness imagery. Whitman continued to write and re-write Leaves of Grass until his death in 1892, and by the time this last edition was completed, the manuscript had grown from a small book of 12 poems to a hefty tome of almost 400 poems. It has since enjoyed massive success and stood the test of time to become one of the greatest literary works of all time and taken its rightful place in literary history. "The most extraordinary piece of wit and wisdom America has yet contributed" - Ralph Waldo Emerson "A work of great beauty, power and imagination." - Saturday Evening Post "Alive with the mythical strength and vitality that epitomized the American experience in the nineteenth century, Leaves of Grass continues to inspire, uplift, and unite those who read it." - New York Times.