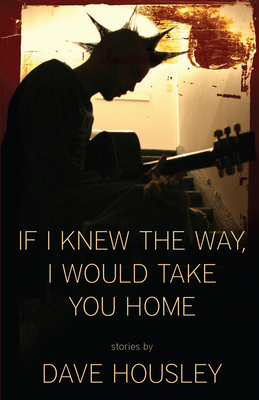 If I Knew the Way, I Would Take You Home

A KISS cover-band leader pondering a fertility-driven criminal act, a boy watching his hair-metal dad search for love on reality TV, a quiet teenage metalhead stumbling into her own voice while trailing her former roadie father--these are the characters seeking resolution, tempering expectations, and occasionally finding grace and the dignity and strength to go on. Dave Housley's collection examines the quiet desperation and occasional triumphs of growing up and growing older through the prism of music.

Dave Housley's work has appeared in Hobart, Mid-American Review, Nerve, and elsewhere. A founding editor of Barrelhouse Magazine, this is his third book.

If I Knew the Way, I Would Take You Home is Dave Housley's third collection of short fiction. Commercial Fiction was published in 2013, and Ryan Seacrest is Famous was published in 2007. He is one of the co-authors of the book Four Fathers, to which he contributed the novella "Evertyhing Worse, All the Time." His work has appeared in Hobart, Mid-American Review, Nerve, Quarterly West, Wigleaf, Dzanc's Best of the Web, and elsewhere. He's one of the founding editors and fiction editors at Barrelhouse Magazine, and one of the co-founders and organizers of the Conversations and Connections writer's conference. He lives with his wife and son in State College, Pennsylvania, where he geeks out about web sites for Penn State.
Loading...
or support indie stores by buying on