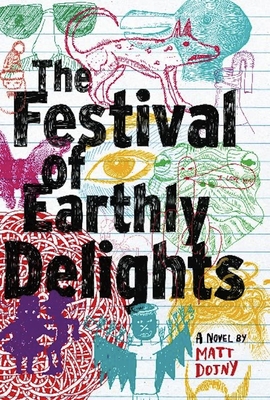 The Festival of Earthly Delights (Hardcover)

"If Puchai were a real country, I'd be a citizen by now, or at least an illegal alien. What a glorious novel " --Gary Shteyngart, author of Super Sad True Love Story

"Matt Dojny's novel is a true delight. I can't think of any writer since Kingsley Amis who's been able to write high-minded comedy that packs such a punch. I've never enjoyed a comic novel more." --John Wray, author of Lowboy

"Matt Dojny's narrator Boyd Darrow is as poetically drawn as J.D. Salinger's Holden Caulfield, and as intimately hilarious as C.D. Payne's Nick Twisp. Dojny has created an entire country filled with characters that are so fresh and endearing, you'll find yourself wishing Puchai were a real place. I love this book." --Kristen Schaal (Flight of the Conchords, The Daily Show)

"Comic novels can be whimsical, or clever, or delightful, or witty, or canny, or powerful. Rarely are they all of those things. Matt Dojny's large-hearted, bright-minded novel has drawings and letters and love and loss, and now you do, too." --Ben Greenman, author of Superbad and What He's Poised to Do

The Festival of Earthly Delights is a humorous bildungsroman set in the fictional Southeast Asian country of Puchai. The protagonist, Boyd Darrow, has recently moved there with his unfaithful girlfriend to give their relationship a second chance. His adventures, and misadventures, are relayed in a series of letters to a mysterious recipient.

A new position falls into the hands of one who, living, dreams. I bought this notebook in the airport when we arrived in Puchai, and, instead of keeping a journal--which always feels lonely and pointless to me--I've decided to write you a letter. IT WILL COME TRUE.

Ulla and I are in the Central Dakhong Railway Station, waiting for the 12:13 train to Mai Mor. The station is rumbling and hot and cavernous and painted floor-to-ceiling in volcanic orange. Ulla has wandered off in search of a bathroom and I'm sitting on a bench, guarding our bags. And--where are you?

Matt Dojny co-authored the illustrated essay "Impossible Sightseeing" in A Public Space, as well as contributing an illustrated piece to THE MOMENT: Wild, Poignant, Life-Changing Stories from 125 Writers and Artists Famous & Obscure. This is his first novel. He lives in Brooklyn with his wife, son, and dog.

Matt Dojny co-authored the illustrated essay "Impossible Sightseeing" in A Public Space, as well as contributing an illustrated piece to THE MOMENT: Wild, Poignant, Life-Changing Stories from 125 Writers and Artists Famous & Obscure. This is his first novel. He lives in Brooklyn with his wife, son, and dog.
or
Not Currently Available for Direct Purchase
Copyright © 2020 American Booksellers Association