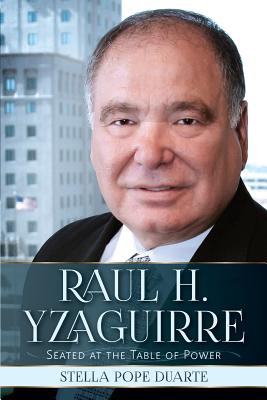 Seated at the Table of Power

From the segregated barrios of the Rio Grande Valley in South Texas, to the halls of Congress and the White House, comes a story based on the memoirs of one of America's premier Latino civil rights leaders: Raul H. Yzaguirre. Born in San Juan, Texas in 1939 to Mexican American parents; his family legacy goes back to the early days of Spanish colonization. Living in a divided city, "the north was for Mexicans and the south was for Anglos," he learned how to enter both worldswith success through the guidance of his beloved grandfather, Gavino Morin. On a quest at age thirteen, he ran away from home and became the youngest sailor on board the Barbee Nell in Corpus Christi. There he met Dr. Hector P. Garc a, founder of the American GI Forum who took the runaway under his wing, and inspired him to dedicate his life to serving his community. Elected as Presidentand CEO of the National Council of La Raza (NCLR) in 1974, his three decades of leadership built NCLR into the largest constituency-based, national Latinoorganization in American history. Raul Yzaguirre's life's story, has empowered America's Latinos, seating them at tables of power. His life's motto has become a reality: "To leave the world a better place.

Stella Pope Duarte was Inspired to write by a prophetic dream of her father in 1995, Stella Pope Duarte is hailed by critics as a "major, literary voice in America." Duarte is described by Jacquelyn Mitchard as a "magical weaver with a sure hand and a pure heart," and by Ursula K. Le Guin as an author who "will enlarge humanity." Her work has won honors and awards nationwide, including the prestigious, American Book Award, Southwest Book of the Year Award, Women in American History Award, Luis Leal Award for Distinction in Chicano/Latino Literature, and a Book Sense 76 Selection. Born and raised in the Sonorita Barrio in South Phoenix, she is a descendant of Irish and Mexican American parents. She believes that her faith and love of family have formed the foundation for her success.
Loading...
or support indie stores by buying on