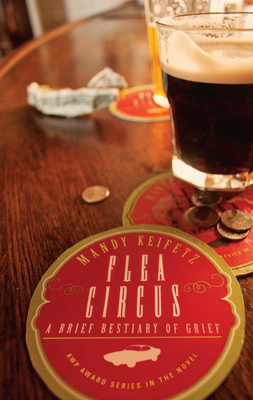 A Brief Bestiary of Grief

Pascal’s Wager and performing fleas. The Haunted Mansion of Long Branch and an old dockside bar. Raceway Park and a pristine 1971 Plymouth Road Runner. A cat named Altamont. These are all that stand between a young mathematician and madness as she attempts to make sense of her lover’s suicide. Narrow margins, you say? Not much to place between a slip of a broken-hearted Jersey Girl and the Abyss? Indeed, it is a treacherous twelve seconds on the quarter mile, hilarious and harrowing by turn. Blink and you’ll miss it.

MANDY KEIFETZ is a 4th-generation New Yorker. Her work has appeared in .Cent, Penthouse, Vogue, The Review of Contemporary Fiction, and other ‘zines too numerous to count. Her first novel, Corrido, has been optioned by a UK production company. She was a Fellow with the New York Foundation for the Arts in 2002 and her plays have been staged in New York, London, Cambridge, Montréal, and Oslo. She is an occasional MFA dissertation defense panelist at U-MASS, Amherst. She lives in Brooklyn with an opera composer, their child, and an exuberant hound dog.
Loading...
or
Not Currently Available for Direct Purchase