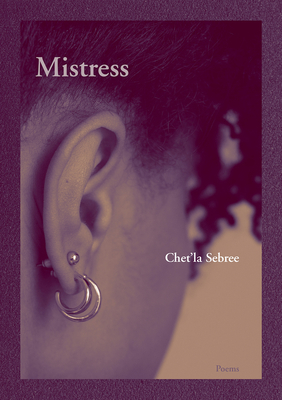 This book of poems presents a cross-generational conversation between Sally Hemings and the contemporary narrator about what it means to be a black woman in their respective landscapes, while at the same time demonstrating how little the ways in which we talk about black women and black female experiences have changed in more than two hundred years. In these poems, the speakers engage with historical texts, art, literature, and popular culture, while never allowing us to lose sight of their location within their own settings, the twenty-first century and the antebellum South.

With an intentionally fraught title, Mistress not only addresses the ways in which that word is perhaps inappropriate to define Hemings, but also about how we tend to oversimplify the ways in which we see women. The title is investigated through a series of poems, in which the speakers contemplate the various definitions of “mistress”: extramarital partner, skilled individual, school teacher, authority figure, head of household, etc. In this way, the collection asks readers to complicate their understandings of both the word “mistress” and of black women. This collection seeks to resurrect Hemings from the limited historical narrative she’s often provided, while also bucking up against the limited ways in which black women are currently represented in popular culture. Through a series of poems with “mistress” in the title, the book looks at how narrowly we use the word, almost exclusively as extramarital partner, but how the word’s different definitions are related to power and strength. When we strip the term of its positive connotations, it mirrors the way that we strip Hemings of the agency she had over her life and the lives of her children.

“From the first poem in Mistress, Chet’la Sebree’s voice gripped me and held on. Sebree’s vision of the persona poem is startling: the narrator is both Sally Hemings and a woman in the present merged to a consciousness un-nesting the ‘holler hidden in her.’ Like Kara Walker’s murals, Sebree runs from—and faces—the dark looming historical forces of miscegenation, enslavement, and the abjection of the black female body. The ghost of Sally Hemings as aberration, as mistress, determines the speaker’s id; tugs at her solitary fantasies; a violent erotic invasion that she inverts and turns on its head with lines etched in rage. Sebree’s language is a scythe that glints wildly. Mistress is truly an astonishing, unforgettable debut.”
— Cathy Park Hong

Born and raised in the Mid-Atlantic, Chet’la Sebree is a poet, editor, and educator. She holds an MFA from American University.