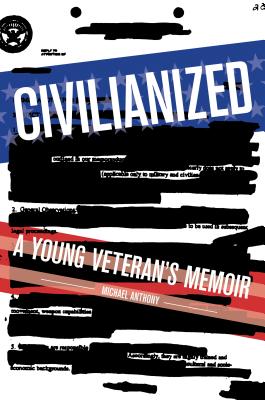 After twelve months of military service in Iraq, Michael Anthony stepped off a plane, seemingly happy to be home—or at least back on US soil. He was twenty-one years old, a bit of a nerd, and carrying a pack of cigarettes that he thought would be his last. Two months later, Michael was stoned on Vicodin, drinking way too much, and picking a fight with a very large Hell’s Angel. At his wit’s end, he came to an agreement with himself: If things didn’t improve in three months, he was going to kill himself. Civilianized is a memoir chronicling Michael’s search for meaning in a suddenly destabilized world.

Michael Anthony is the author of Mass Casualties: A Young Medic's True Story of Death, Deception, and Dishonor in Iraq, which received a starred review from Publishers Weekly, and blurbs from Howard Zinn, Bing West, David Bellavia, and Philip Zimbardo. He has written for the Washington Post blog, the Business Insider blog, as well as several others, including a year-long stint as a feature writer and the editor of the “War and Veterans” section of the Good Men Project. He lives in Boston, MA.

"Michael Anthony writes with emotional clarity, dark wit, and unpremeditated honesty.  But what stayed with me most, I think,  were the quiet punches to the gut:  That to kill oneself, one must not only feel like dying, but like killing, and the feelings could not be farther apart.  That what messed with him most was not the brutality of his foes but the moral bankruptcy of certain commanders.  That it is not so much the intensity of combat that derails a soldier but the flatness of its absence.  I won't soon forget this book." –Mary Roach, author of Grunt: The Curious Science of Humans at War and Stiff: The Curious Lives of Human Cadavers

"Civilianized is a remarkable account of what it's like to live inside post-traumatic stress disorder. It's also smart and mordantly funny'"--Milwaukee Journal Sentinel

“Civilianized has the introspection of a literary memoir and the narrative momentum of a novel.” –Booklist

"Michael Anthony’s expressive wit and deep emotionality connect with a vital story to present an account of the veteran’s experience returning from war that is prevalent, yet far too infrequently told. Civilianized questions what it means to be a soldier, and what it then means to be a civilian. There are no easy answers, but Anthony delivers a dose of reality that can awaken the mind and provides useful information about the challenging transition soldiers face upon returning home."--Bookreporter

"Memoirs and novels about the horrors of war are far more common than memoirs and novels that explore the less recognizable horrors of slowly losing oneself to despair or addiction after the soldier returns home, which makes Civilianized an important addition to recent war literature. Whatever your opinion on the United States’s involvement in conflicts around the world, Anthony’s memoir shows that the men on the front lines in those conflicts aren’t superhuman or lacking in emotion—quite the opposite. They are people with hopes, dreams, and fears just like the rest of us."--The Rumpus

"Michael Anthony's Civilianized howls with hard-earned wisdom. An unflinching story of homecoming and the after-war, Anthony has been to the brink and back. He writes with both soul and candor, and for that, contemporary war literature is in his debt." - Matt Gallagher, author of Youngblood and Kaboom: Embracing the Suck in a Savage Little War

"Anthony navigates the dark side of a veteran's homecoming with honesty, skill, and even a touch of humor. Prepare to be disturbed and entertained in equal measures." - Brian Castner, author of The Long Walk and All the Ways We Kill and Die

"In this tender memoir Civiliaznized, returning Iraq war veteran Michael Anthony hurls us into the raw, moral betrayals of war and the awful moral dislocation of coming home.  At times hilarious, at other times harrowingly sad, Anthony's memoir screams out at us to pay attention to the needs of our veterans." - Nancy Sherman, author of Afterwar: Healing the Moral Wounds of our Soldiers and Untold War: Inside the Hearts Minds and Souls of our Soldiers.

"Important and essential, Civilianized is an unflinching look at the dark hell of reintegration. Michael Anthony's personal story provides us with a deeper understanding of the war that many of us post 9/11 veterans face alone when returning home. A must read." - Colby Buzzell, author of My War: Killing Time in Iraq and Thank You for Being Expendable