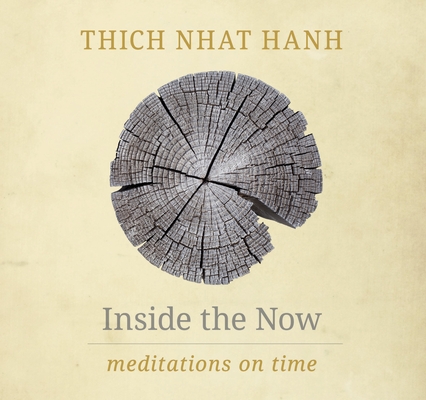 This beautifully designed book will be cherished for generations. Written in the summer of 2013, Inside the Now contains the most recent, never before published commentaries and reflections of Thich Nhat Hanh on living in stillness and timelessness.

The book begins with an autobiographical reflection in which we hear the voice of the young monk, poet, and community-builder struggling in war-torn Vietnam to develop a Buddhism relevant to the suffering of his time. These early experiences lay the groundwork for Thich Nhat Hanh's insights into the nature of time and interbeing.

In part two, we hear the clear, direct voice of the Zen Master challenging us to open our hearts, seize the moment, and touch the now. The book is interspersed with poetry from other Zen masters as well as the author's own verse and calligraphy.

THICH NHAT HANH is one of the most revered and influential spiritual teachers in the world today. Born in Vietnam in 1926, he became a Zen Buddhist monk at the age of sixteen. Over seven decades of teaching, he has published more than 100 books, which have sold more than five million copies in the United States alone. Exiled from Vietnam in 1966 for promoting peace, his teachings on Buddhism as a path to social and political transformation are responsible for bringing mindfulness to the West. In 1982 he established the international Plum Village Community of Engaged Buddhism in France, now the largest Buddhist monastery in Europe. He lives in Hue in Central Vietnam.
Loading...
or
Not Currently Available for Direct Purchase