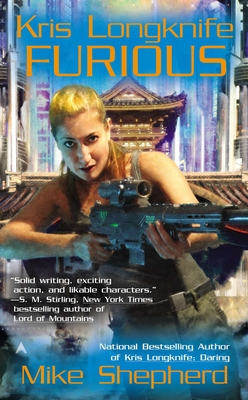 Having used unorthodox methods to save a world—and every sentient being on it—Lieutenant Commander Kris Longknife is wanted across the galaxy for crimes against humanity. For her own safety, she’s been assigned to a backwater planet where her Fast Patrol Squadron 127 enforces immigration control and smuggler interdiction.

But Kris is a Longknife, and nothing can stop her from getting back to the center of things—not when all hell is breaking loose. Now she’s on the run, hunted by both military and civilian authorities—and since the civilian authorities happen to be her immediate family, Kris soon finds herself homeless, broke, and on trial for her life on an alien world…

"Mike Shepherd" is a pseudonym for Mike Moscoe. Moscoe, a former civil servant, lives in the Pacific Northwest with his wife Ellen and now writes full-time. As Mike Shepherd, he has written the five very popular Kris Longknife military science fiction adventures, with more to come!

Praise for the Kris Longknife series:

“Kris can kick, shoot, and punch her way out of any dangerous situation, and she can do it while wearing stilettos and a tight cocktail dress.”—Sci Fi Weekly
or support indie stores by buying on
Copyright © 2020 American Booksellers Association