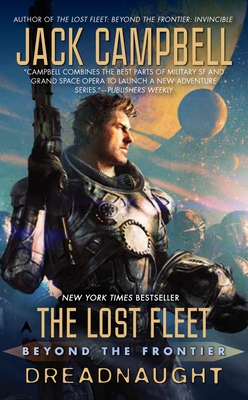 Beyond the Frontier: Dreadnaught

The Alliance woke Captain John “Black Jack” Geary from cryogenic sleep to take command of the fleet in the century-long conflict against the Syndicate Worlds. Now, Admiral Geary’s victory has earned him the adoration of the people—and the enmity of politicians convinced that a living hero can be a very inconvenient thing…

The war may be over, but Geary and his newly christened First Fleet have been ordered back into action to investigate the aliens occupying the far side of Syndic space and determine how much of a threat they represent to the Alliance. And while the Syndic Worlds are no longer united, individually they may be more dangerous than ever before.

Praise For The Lost Fleet: Beyond the Frontier: Dreadnaught…

“The story line is as always faster than the speed of light.”

"Jack Campbell" is the pseudonym for John G. Hemry, a retired Naval officer (and graduate of the U.S. Naval Academy in Annapolis). As Jack Campbell, he writes The Lost Fleet series of military science fiction novels. He lives with his family in Maryland.
Loading...
or
Not Currently Available for Direct Purchase