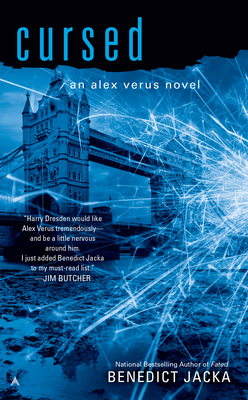 Dark rituals drag London mage Alex Verus into the center of a conspiracy in this thrilling novel from the national bestselling author of Marked.

Since his second sight made him infamous for defeating powerful dark mages, Alex Verus has been keeping his head down. But now he's discovered the resurgence of a forbidden ritual. Someone is harvesting the life-force of magical creatures—destroying them in the process. And draining humans is next on the agenda.

Hired to investigate, Alex discovers not everyone on the Council wants him delving any deeper. Struggling to distinguish ally from enemy, he finds himself the target of those who would risk their own sanity for power. Alex still has the advantage of seeing the future—but he might not have a future for much longer.

“Benedict Jacka started off his Alex Verus series with a bang with Fated, and doesn’t lose pace with Cursed.”—SF Site

“Jacka follows his urban fantasy debut, Fated, with an even more impressive tale of gunplay and spellcraft in present-day London...Readers will savor this tasty blend of magic, explosions, and moral complexity.”—Publishers Weekly (starred review)

“Cursed ups the ante in almost every department of the book, and it will fetch the author more fans as they strive to find satisfaction from books other than the Dresden Files. Be sure to check out this wonderful series.”—Fantasy Book Critic

“Benedict Jacka is a master storyteller. He has a wonderful way of taking familiar ideas and polishing them until they glow, then intertwining them with something new...A brilliant urban fantasy that is so professionally polished and paced that you barely remember to come up for air. Cursed takes everything that was great about Fated and then puts it on a diet of steroids. It is fun and action packed but now bigger, angrier, and absolutely nuts. I loved it.”—Fantasy Faction

“If you like action-packed, magic-fueled story then this is the series for you. It has a fast-paced story which captivated me from start till finish and had a complex mystery that you could really get into.”—Under the Covers Book Blog

Benedict Jacka is the national bestselling author of the Alex Verus series. He’s half Australian, half Armenian, and grew up in London. He's worked as a teacher, bouncer, and civil servant, and spends his spare time skating and playing tabletop games.
Loading...
or support indie stores by buying on
(This book is on backorder)