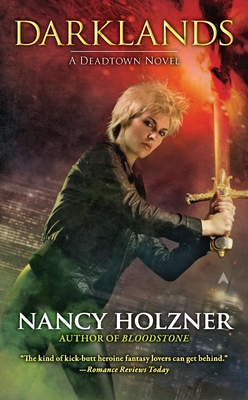 They call it Deadtown: the city’s quarantined section for its inhuman and undead residents. Most humans stay far from its border—but Victory Vaughn, Boston’s only professional demon slayer, isn’t exactly human…

Boston’s demons have been disappearing, and Vicky’s clients are canceling left and right. While fewer demons might seem like a good thing, Vicky suspects foul play. A missing Celtic cauldron from Harvard’s Peabody museum leads her to an unwelcome conclusion: Pryce, her demi-demon cousin and bitter enemy, is trying to regain his full powers.

But Pryce isn’t alone. He’s conjured another, darker villain from Vicky’s past. To stop them from destroying everything she loves, she’ll have to face her own worst fear—in the realm of the dead itself.

Nancy Holzner grew up in western Massachusetts with her nose stuck in a book. This meant that she tended to walk into things, wore glasses before she was out of elementary school, and forced her parents to institute a “no reading at the dinner table” rule. It was probably inevitable that she majored in English in college and then, because there were still a lot of books she wanted to read, continued her studies long enough to earn a masters degree and a Ph.D.

She began her career as a medievalist, then jumped off the tenure track to try some other things. Besides teaching English and philosophy, she's worked as a technical writer, freelance editor and instructional designer, college admissions counselor, and corporate trainer.

Nancy lives in upstate New York with her husband Steve, where they both work from home without getting on each other's nerves. She enjoys visiting local wineries and listening obsessively to opera. There are still a lot of books she wants to read.


Praise For Darklands (A Deadtown Novel #4)…

Praise for the Deadtown Novels

“All urban fantasy lovers should be reading this superb series.”—Bitten by Books

“Fresh and funny with a great new take on zombies.”—Karen Chance, New York Times bestselling author of Hunt the Moon

“Nancy Holzner is a master of characterization and I’ll be buying her next book the moment it hits the shelf.”—Ilona Andrews, New York Times bestselling author of Fate’s Edge