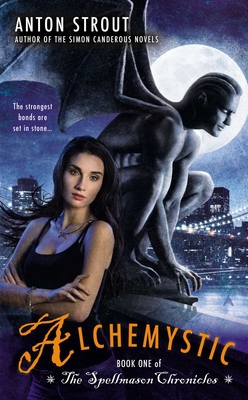 AN OLD FRIEND OF THE FAMILY…

Alexandra Belarus is a struggling artist living in New York City, even though her family is rich in real estate, including a towering Gothic Gramercy Park building built by her great-great-grandfather. But the truth of her bloodline is revealed when she is attacked on the street and saved by an inhumanly powerful winged figure. A figure who knows the Belarus name…

Lexi’s great-great-grandfather was a Spellmason—an artisan who could work magic on stone. But in his day, dark forces conspired against him and his, so he left a spell of protection on his family. Now that Lexi is in danger, the spell has awoken her ancestor’s most trusted and fearsome creation: a gargoyle named Stanis.

Lexi and Stanis are equally surprised to find themselves bound to each other. But as they learn to work together, they realize that only united can they save the city they both love…


Praise For Alchemystic (A Spellmason Chronicle #1)…

Praise for the novels of Anton Strout:

“Following Simon’s adventures is like being the pinball in an especially antic game, but it’s well worth the wear and tear.” —Charlaine Harris, #1 New York Times bestselling author

"Make room on the shelf, ‘cause you’re going to want to keep this one!” —Rachel Vincent

Anton Strout was born in the Berkshire Hills mere miles from writing heavyweights Nathaniel Hawthorne and Herman Melville. He is an always writer, a sometimes actor, sometimes musician, occasional RPGer, and the world's most casual and controller-smashing video gamer. He currently works in the exciting world of publishing and yes, it is as glamorous as it sounds.
Loading...
or support indie stores by buying on