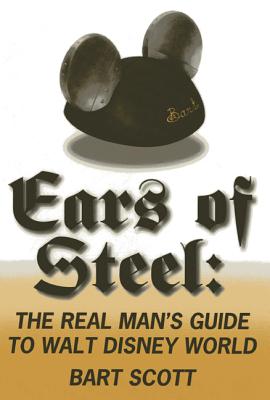 Walt Disney World is for little kids, princesses, and dweebs, right? WRONG There's more than enough at WDW to keep the two-fisted, thrill-seeking, hard-drinking, meat-eating he-man of the house happy as a caveman with a mammoth rib. Bart Scott comes to the aid of moms and girlfriends everywhere with the only guidebook specifically designed to convince the football-watching, beer-swilling, couch potato they love that a trip to WDW will not only reduce the whining in the household and give them continued access to those special favors, but will actually be FUN for them. Scott's the real deal--a real guy, with big appetites, firm convictions, and a healthy disdain for pretentiousness in all its forms. He's also big enough to admit that the toughest hombre's heart melts a little when his own little princess falls under the spell of Disney magic. Ears of Steel is an honest, straight-from-the-shoulder, and frequently hilarious look at everything in Walt Disney World that keeps real men coming back, with all the sissy stuff either glossed over or ignored entirely.

Bart Scott is a real man who loves the Disney parks. He lives in the Chicago area with his wife and three children.
Loading...
or
Not Currently Available for Direct Purchase