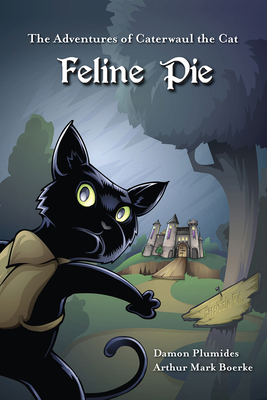 The Adventures of Caterwaul the Cat

Original fairy tales are delightful, and The Adventures of Caterwaulis just that, filled with humorous dialogues and phrases that will keep the reader spellbound.

Caterwaul the cat jumps from the frying pan into the fire when he escapes the clutches of the Witch of Red Moon Forest and moves in with the aging Queen Druciah, thinking he has finally found a home. Things seem pretty good until he discovers that there is one small catch: Caterwaul must find the queen a pure white female cat and use his magic to help her learn the long-forgotten recipe for Feline Pie.

Because he yearns for a home of his own, Caterwaul takes on the challenge that throws him into messes with militant frogs, feline mobsters, wicked hunters, corrupt police constables, and giant snapping turtles. Does Caterwaul succeed. . .and does he turn over a pure white female cat to Druciah for her wicked plans?

Born and raised in the Carolinas, Damon Plumides is a writer, musician, and wine consultant. It was while singing in his former band, Dead Cut Tree, that he met his friend and future writing partner, In 2010, Damon approached his friend Arthur Mark Boerke with the idea of creating a world where magic was real and animals and people coexisted and interacted as equals. The hero of the story would be a black cat named Caterwaul. The result of this collaboration, "The Adventures of Caterwaul the Cat: Feline Pie."