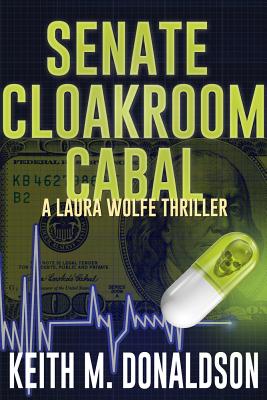 “We don't manufacture cures. We manufacture dependencies.” So says the head pharmaceutical lobbyist to the majority leader of the United States Senate. Soon after that utterance, a miracle-cure cancer drug is rejected by the US Food and Drug Administration because of purported side effects.A first-year senator, Roanne Dalton senses illegal activity in her own party, but is powerless to act on her own. Instead, she seeks an objective investigator and turns to the well-respected and savvy Washington Daily Star reporter Laura Wolfe. Senator Dalton and Laura suspect a Capitol Hill conspiracy with horrific consequences—keeping this anxiously awaited drug away from the American people—a conspiracy of greed and deceit that, without warning, turns deadly. Senate Cloakroom Cabal is the second installment in the thrilling Laura Wolfe series, following Death of an Intern.

Keith Donaldson's passions were always in the performing arts and writing. A graduate in drama and broadcasting, he worked in production at NBC for seventeen years and then four years in advertising as a writer-producer of radio and television commercials. He later formed his own advertising agency, which he ran for twelve years in Washington, DC. He studied playwriting and became involved in Washington theater for over a decade—writing over a dozen plays, acting, and directing. Raised in northern New Jersey, he spent over forty years in the Washington, DC area before moving to coastal North Carolina, where he continued to write fiction and be involved in theater.
Loading...
or
Not Currently Available for Direct Purchase