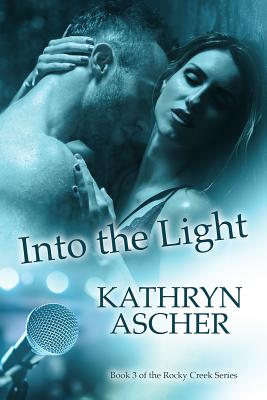 Into the Light (The Rocky Creek Series)

Jackson Harris fell in love with his best friend’s sister, but at her brother’s request, he stepped out of her life to clean up his act. When he was ready to declare his love to her, she rejected him, sending him back into a tailspin of bad behavior. Four years later, he’s focused on his struggling band , the women who want him, and still trying to forget the one who didn’t. When she suddenly shows up as his band’s new manager, he realizes that, despite his best efforts, his feelings for her haven’t changed a bit. Kerrigan Dodd has spent the past four years living in Europe, trying to forget that Jackson, the only man she’s ever loved, walked out of her life six years earlier. After returning home, the last thing she expected was that her new job was to manage his failing band. To make matters worse, she barely recognizes the boy she fell in love with in his band persona, and the prospect of spending so much time with him has her questioning her ability to do her job. As Jack and Kerrigan work to turn the band around, they struggle to overcome the secrets that have kept them apart. Just when they’re coming together, on both fronts, other forces conspire to keep them from reaching their goals. Will they be able to put the past behind them and clear the way for their future? Or are their current differences too much to move beyond?

Born and raised in Virginia, Kathryn Ascher graduated college with a degree in communications but writing has been a passion since she was in high school. She is a big fan of romance novels, both reading them and writing them. Readers proclaim that what makes her books so are the strong lead characters, an interesting cast of secondary characters, real life situations, a dash of humor, and most importantly, the feeling of falling in love for the first time, that Kathryn portrays so well. “Into the Light” is the third book in her Rocky Creek Series. Kathryn resides with her husband and three children in Land O’ Lakes, Florida.