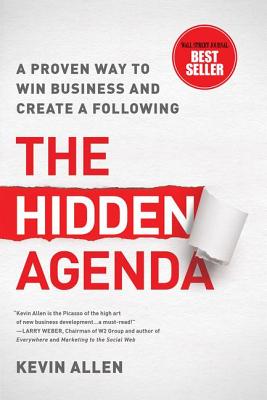 A Proven Way to Win Business & Create a Following

Each of us pitches ideas every day. Regardless of what idea we're selling-or who we're selling it to-it all boils down to the act of stirring someone to join you, to agree to follow you. Yet we consistently underestimate how critical it is to recognize the role of the decision maker. Decisions are, after all, made by people; and people have needs and agendas, spoken and unspoken. Understanding these needs and agendas are critical to success in business. Kevin Allen's approach is not about persuading, but about creating a connection that assures a mutual win. By unearthing the true motivation or desire of the decision maker, Allen shows how to craft a story or message around it, creating a predictable and repeatable end result. Full of stories and examples, this entertaining book teaches you how to effectively find, connect, and finally to speak to the Hidden Agenda to win business unfailingly, every time.

Kevin Allen is founder & chairman of Planet Jockey, which specializes in gamified leadership training, and re: kap, a business transformation company which counts Google, Burberry, Smythson, Swedbank and Verizon among its global clients. He is recognized as one of the world s most accomplished growth professionals. He is the best-selling author of The Hidden Agenda: A Proven Way to Business and Create a Following (Bibliomotion, 2012), and also The Case of the Missing Cutlery: A Leadership Course for the Rising Star (Bibliomotion, 2014), which has been featured on BBC Radio s Four Thought leadership series. With decades at the top of advertising giants McCann-WorldGroup, the Interpublic Group and Lowe and Partners Worldwide, Kevin worked with such brands as MasterCarddeveloping the globally famous "Priceless" campaignMicrosoft, Marriott, Smith Barney, Nestle, L'Oreal, Lufthansa and Johnson & Johnson, and was an early part of Rudy Giuliani's team that prepared the way for the successful Mayoral election and turnaround strategies for the City of New York. An academy instructor at the Cannes Lions International Festival of Creativity and Eurobest Festival, and a visiting lecturer at the Columbia University Graduate School of Business and the European Business School at Regents College London, Kevin is a featured speaker at companies like Google, Microsoft and has appeared on BBC. Lawrence Flanagan: Lawrence Flanagan is the Executive Dean of College of Business at the University of New Haven. He is regarded as one of the most accomplished global marketing leaders in the country."
or
Not Currently Available for Direct Purchase
Copyright © 2020 American Booksellers Association