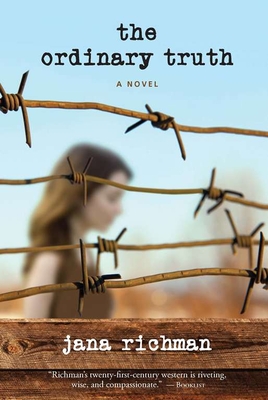 "With tough women and sensitive men, desert-dry humor, hot-springs sensuality, heartbreaking secrets, escalating suspense, and a 360-degree perspective on the battle over water, Richman's twenty-first-century western is riveting, wise, and compassionate."
--BOOKLIST, starred review " A] compelling story of a ranching family divided by a proposed water pipeline that would draw water from western Utah to Las Vegas."
--THE SALT LAKE TRIBUNE "Richman helps readers understand and feel deeply each side of a complex story."
--DESERET NEWS " Richman's] narrative account of the impact of climate change on those that live in the worst affected areas--human and animal alike--is an emotional prophecy of what lies in store for all of us."
--15 BYTES "With a unique voice, Richman crystallizes how secrets and silences flow through the generations...with depth of characters, beauty of language, and a haunting understanding of the landscapes that define us."
--JANE KIRKPATRICK, bestselling author of Where Lilacs Still Bloom "The Ordinary Truth tells a page-turner of a story about love and loyalty, loss and regret--and, ultimately, the stunning absolution of the simple truth. Richman writes...with the sure hand of a formidable storyteller."
--STEPHEN TRIMBLE, author of Bargaining for Eden When Nell Jorgensen buried her husband, she buried a piece of herself--and more than one secret. Now, thirty-six years later, the rift between Nell and her daughter Kate threatens to implode as Kate, now forty-six and a water manager for the Nevada Water Authority, plans to pipe water from a huge aquifer that lies beneath the family ranch to thirsty Las Vegas. Meanwhile, Nell's twenty-one-year-old granddaughter Cassie intends to unearth those old secrets and repair the resentments that grew in their place. Throughout the novel, sparse and beautiful landscapes surround an emotional wilderness of love, loss, and family. Jana Richman is the award-winning author of The Last Cowgirl (HarperCollins, 2009), which won the 2009 Willa Award for Contemporary Fiction. A sixth-generation Utahn, Jana was born and raised in Utah's west desert, the daughter of a small-time rancher and a hand-wringing Mormon mother. With the exception of a few misguided years spent in New York City trying to make a fortune on Wall Street, she has lived her entire life west of the hundredth meridian. She writes about issues that threaten to destroy the essence of the west--and about passion, beauty, and love. Jana lives in Escalante, Utah. Praise for Jana Richman's The Last Cowgirl "Richman's mastery of the emotional geography is illuminating...Calls to mind the work of Pat Conroy."
--Kirkus Reviews Praise for Jana Richman's Riding in the Shadows of Saints: A Woman's Story of Motorcycling the Mormon Trail "Openhearted and uncommonly balanced."
--Entertainment Weekly "Tartly funny."
--Chicago Tribune "Surprising and refreshing."
--Philadelphia Inquirer "Much to admire in this] moving memoir... Richman] can write lyrically and unsentimentally about the most intimate experiences."
--Newsday (New York) "Beautifully poetic...exploratory...thought-provoking."
--New Orleans Times-Picayune "Frank and beguilingly unsentimental, Riding in the Shadows of Saints is an honest look at a powerful and wealthy institution and the people who live within its structures."
--Tucson Citizen "A mixture of road trip musings, quirky adventure tales, and spiritual reflections, with a healthy dose of unresolved family issues...universally compelling."
--Publishers Weekly

Jana Richman: Richman was born and raised in Utah's west desert, the daughter of a small-time rancher. She writes about issues that threaten to destroy the essence of the West and lives with with her husband, writer and transpersonal therapist, Steve Defa.
or
Not Currently Available for Direct Purchase
Copyright © 2020 American Booksellers Association