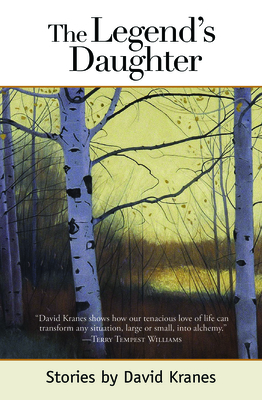 WINNER OF THE 15 BYTES BOOK AWARD David Kranes uses language like a knife and the worlds in his stories come off the page.
--RON CARLSON, author of The Signal The stories in The Legend's Daughter inhabit present-day Idaho where fires, streams, and landscapes ask--even demand--that individuals reconsider and reorient their lives. An award-winning playwright, David Kranes infuses this collection with swift dialogue and complicated characters, including a kayaking actor, a rebellious high school teacher, and a lipstick-loving fly fisherman.

DAVID KRANES is an emeritus professor of English at the University of Utah, where he received the Ramona Cannon Teaching Award and University Professor Award, among other honors. He is author of two volumes of short stories and seven novels. His 2001 novel, The National Tree, was adapted for television and aired on the Hallmark channel in November 2009. His short story, Cordials, won the 1996 Pushcart Prize, followed the next year by Low Tide in the Desert: Nevada Stories, which won the Western Heritage Award for Best Short Story. His writing has appeared in such magazines as Esquire, Ploughshares, and Transatlantic Review. Over fifty of his plays have been performed in New York and across the US, and his radio plays have been performed in the US, Canada, and abroad. The opera, Orpheus Lex, for which Mr. Kranes wrote the libretto, was performed at New York City's Symphony Space in February 2010. His volume of Selected Plays was published in August of 2011. A new play, The Last Word, developed at NYC's Lark Theater was recently given a staged reading at Salt Lake Acting Company. In his second (or is it third?) life, Mr. Kranes travels and consults for the casino industr
Loading...
or support indie stores by buying on