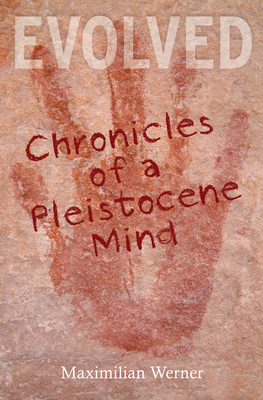 Chronicles of a Pleistocene Mind

How did you choose your home? What side of the bed do you sleep on? Could you be like a spider? In this memoir-infused exploration of evolutionary theory, Maximilian Werner shows how our Pleistocene instincts inform our everyday decisions and behaviors in a fresh and friendly modern-day Walden. "Werner's prose is compelling, his natural history is thoroughly engaging, and his line of curious inquiry is an admirable attempt to better understand humanity and its changing relationship with the external world."
--Publishers Weekly "Werner questions why he responds to particular situations in particular ways, from choosing which bedroom to give his son to feeling less protective of a friend than of his wife during hikes, and tries to connect those subconscious decisions to evolutionary reasons."
--ForeWord Reviews "Werner makes evolutionary theory accessible through case studies of both human and nonhuman subjects, teaching us how immersed all living creatures still are in the things that made the difference between life and death hundreds of generations ago."
--Salt Lake City Weekly "This book provides an entry in to the great epic of evolution in a way that makes it both accessible and inspiring. This is no small accomplishment and we are all indebted to Maximilian Werner."
--Mary Evelyn Tucker, co- author, Journey of the Universe "Join this sensitive and perceptive naturalist as he explores his yard and nearby caves and mountains, carefully observing the activities of myriad life forms, and then reflecting insightfully on the evolutionary story we share with them. Learn from him how to feel completely at home in the world."
--Loyal Rue, author of Religion is Not about God: How Spiritual Traditions Nurture Our Biological Nature and What to Expect When They Fail "Werner's book, thought-provoking and emotionally satisfying, takes us on a journey, a journey that ultimately urges each one of us to get up, go outside and hunt around the edges of our homes for the mysteries that await."
--Sylvia Torti, author of The Scorpion's Tail

Maximilian Werner is the author of the 2011 novel Crooked Creek and Black River Dreams, a collection of literary fly fishing essays that won the 2008 Utah Arts Council's Original Writing Competition for Nonfiction. Mr. Werner's poems, fiction, creative nonfiction, and essays have appeared in numerous journals and magazines, including Matter Journal: Edward Abbey Edition, Bright Lights Film Journal, The North American Review, ISLE, Weber Studies, Fly Rod and Reel, and Columbia. He lives in Salt Lake City with his wife and two children and teaches writing at the University of Utah. John Alcock is a behavioral ecologist and writer. His research interests include the evolution of diversity in insect populations and studying the adaptive value of different ways in which males find mating partners. He is the author of several books, including The Kookaburras' Song: Exploring Animal Behavior in Australia (1988), Sonoran Desert Summer (1990), The Triumph of Sociobiology (2003), and Animal Behavior: An Evolutionary Approach (ninth edition, 2009).
or support indie stores by buying on
Copyright © 2020 American Booksellers Association