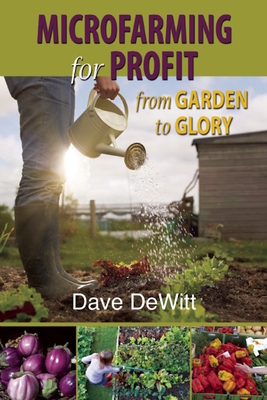 From Garden to Glory

NOTE: Product's binding problem now fixed. 2015 NEW MEXICO-ARIZONA BOOK AWARD WINNER This useful, entertaining guide gives prospective microfarmers the dirt on realistic essentials for turning a garden into a money-making enterprise...The author advises on such basics as business plans and sales techniques; profiles a range of actual working microfarms, from flowers to killer bees; and relates hilarious stories from his own microfarming.
--PUBLISHERS WEEKLY No generalities or theory here: this is all applied wisdom--which is why it works so well Readers who want to turn their few acres into a profitable business venture would do well to turn to Microfarming for Profit as the first approach to turning an idea into reality.
--CALIFORNIA BOOKWATCH DeWitt brings a lifetime of experience to this new guide for those interested in taking their hobby garden to a new level... he] writes with authority and practicality, making this book an excellent resource for the novice microfarmer.
--DESERET NEWS ...delightful...fun to read...a good starting point, and provides valuable information for farming on a very small scale.
--MICRO FARM LIFE With wit, expertise, and common sense, Dave DeWitt shows you how to establish a successful microfarm by choosing the most profitable plants and animals to raise and learning to market and sell what you produce. His informative yet conversational style makes you feel you're talking with an expert you already know. Declared the pope of peppers by the New York Times, Dave DeWitt is one of the foremost authorities on chile peppers and spicy foods. A food historian and prolific writer, he is the author of over fifty books including gardening guides, food histories, and cookbooks. DeWitt is an associate professor in the College of Agriculture, Consumer, and Environmental Sciences at New Mexico State University, and co-producer of the National Fiery Foods and Barbecue Show, now in its twenty-sixth year. Dave lives with his wife in Albuquerque, New Mexico.

Dave DeWitt is the author of over 50 books, mostly on chile peppers and fiery foods, but also including novels, food histories, and a travel guide. Dave is an associate professor in the College of Agriculture, Consumer and Environmental Sciences at New Mexico State University, and co-producer of the National Fiery Foods & Barbecue Show, now in its 26th year. Dave lives in Albuquerque with his wife, Mary Jane Wilan.
Loading...
or support indie stores by buying on