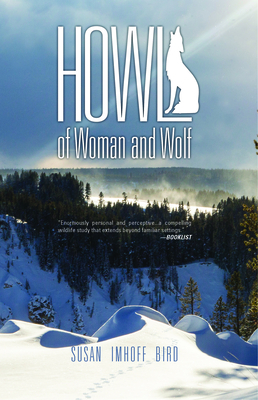 Of Woman and Wolf

"Enormously personal and perceptive...a compelling wildlife study that extends beyond familiar settings."
--BOOKLIST "Howl has all the depth, complexity, and moving power of that most haunting of sounds: the howl of a wild wolf. Bird shows us that the gap between tameness and wildness...is not so far as it might seem, and we ought to venture across to find out how wild feels. Howl is] an education on a singular animal and an identification with a singular storyteller."
--15 BYTES "An accessible, quick-paced read, Howl] extends the reader's imagination to see wolves and many other issues in perspectives he or she might not have ever anticipated...Bird's book demonstrates what creative nonfiction can accomplish in motivating a disconnected citizenry to rediscover and rejuvenate its relationship with nature and the non-human world."
--THE UTAH REVIEW "Howl: of Woman and Wolf is an emotional, spiritual and educational literary journey...with fascinating information about wolves, it makes for a soulful, intriguing story."
--THE DESERET NEWS "Transporting the reader to her beloved high deserts and canyons with her gorgeous prose...Susan Imhoff Bird seamlessly weaves the story of the wolf with her own narrative."
--BLUE RIDGE OUTDOORS "With humor, sensitivity, and probing intelligence, Bird's inquiry into the world of the wolf weaves an outer journey with inner way-finding, resulting in an inspiring book about more than being human--it's about being alive."
--MARY ELLEN HANNIBAL, author of The Spine of the Continent: The Race to Save America's Last, Best Wilderness "A well-rounded wolf tale told by a writer who is comfortable both inside and outside her human skin. It speaks with an unsheltered heart reaching beyond loss for a wilder tether, that ancient yet enduring story of (wo)man and beast."
--DOUG PEACOCK, author of Grizzly Years "With wit, emotion and passion, Susan thinks like many who have pondered the issue do not. It's well worth the time reading this preciously fresh look at an ancient conflict."
--DOUG SMITH, author of Decade of the Wolf, senior wildlife biologist, Yellowstone National Park "The brave writers of natural history understand both the technical and the spiritual sides of ecology; and they don't shy from either. Susan Imhoff Bird is one of these."
--MICHAEL SOULE, editor of Conservation Biology: Research priorities for the next decade "A quest to find the heart and soul of the wolf."
--RICK MCINTYRE, author of A Society of Wolves Commemorating the twentieth anniversary of the reintroduction of wolves to the American West, Howl follows Susan Imhoff Bird's exploration into the passions and controversies surrounding nature's most fascinating predator. At a crossroads in her own life, Bird travels around the West, talking with wolf watchers, landowners, wildlife managers, conservationists, and hunters about their understandings of what matters most, which almost always is their connection with the natural world. However, the often-conflicting issues raised by hunters, ranchers, and politicians prompt Bird's personal examination of wolf science, myths, and ethics, culminating in her conviction that wolves must be allowed to recover and thrive on our lands. Along the way, Bird begins to unleash her own wild nature, learning to howl and inviting us to do the same. Susan Imhoff Bird finds inspiration in Utah's canyons, valleys, and water-sculpted rock. She can often be found on her bicycle or snowshoes, absorbing the wisdom of the natural world. Bird lives in Salt Lake City, Utah.

Susan Imhoff Bird finds inspiration in Utah's stunning canyons, valleys and water-sculpted rock. Traveling in Asia, South America, and Europe has exposed her to varied cultures and societies, resulting in an award-winning short story and a book about humanitarian work in Nepal. A mom of three and owner of a gratitude-based business, she is fascinated by human interactions. When not writing, reading, trying to meditate, or attempting yoga asanas, she can be found on her bicycle or snowshoes, absorbing the wisdom of the natural world. And occasionally howling.
or
Not Currently Available for Direct Purchase
Copyright © 2020 American Booksellers Association