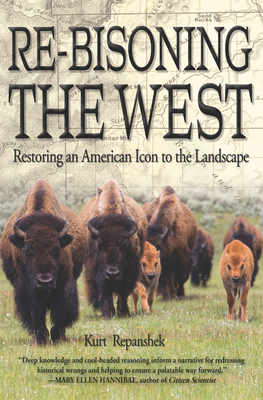 Restoring an American Icon to the Landscape

"A much-needed look at the exceptionally fraught relationship between bison and people...engaging and comprehensive."
--BOOKLIST
"A fascinating perspective...Re-Bisoning the West demonstrates the complex relationships the species maintains with the earth and humanity itself."
--FOREWORD REVIEWS Award-winning journalist Kurt Repanshek traces the history of bison from the species' near extinction to present-day efforts to bring bison back to the landscape--and the biological, political, and cultural hurdles confronting these efforts. Repanshek explores Native Americans' relationships with bison, and presents a forward-thinking approach to returning bison to the West and improving the health of ecosystems.

Kurt Repanshek, an award-winning journalist whose career stretches into four decades, is well-versed in public lands, wildlife, recreation, and environmental issues. His writing has appeared in Smithsonian, Audubon, National Geographic Traveler, and numerous other periodicals. He is the founder of NationalParksTraveler.org, the only editorially independent media organization that is dedicated to daily coverage of national parks and protected areas.
or support indie stores by buying on
Copyright © 2020 American Booksellers Association