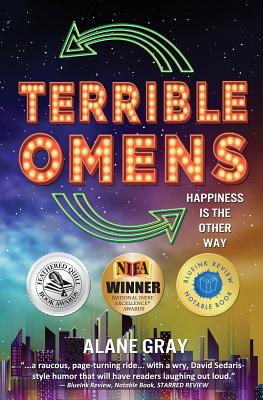 Happiness is the Other Way

Terrible Omens is a darkly witty, fast-paced ride through a fifteen-year relationship that starts with a twenty-something romance and ends in divorce. It is the story of a marriage that is eventually unmasked to reveal its true self--a strangely hilarious horror story.

This betrothal ends in betrayal with a seemingly endless stream of undeniable warning signs along the way--a crazy mother-in-law, unauthorized photocopies of a private journal, a wannabe biker chiropractor, paranormal visions, zombie fantasies, and transient lunacy. Real life is more horrific than the exploding home-brew beer buckets and ghosts that occasionally haunt the house.

Alane Gray's story is an unflinching cautionary tale about what happens when hormones and social expectations lead two young people to say "I do" when they should have said "I don't." When the signs all point to the exits--they keep running the wrong way.