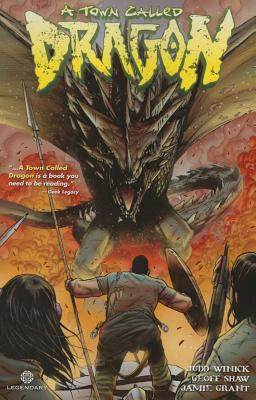 Legendary Comics transports you to a A Town Called Dragon. On the surface it seems like your average all-American tourist trap, but this snow-covered town hides a burning secret. After centuries of lying buried within the depths of an icy mountain, the world's last dragon egg finally hatches -- endangering modern life as we know it. Now an unlikely group of dangerously unqualified, ordinary citizens must band together, battling the elements -- and each other -- to slay this menacing creature.

Written by fan-favorite JUDD WINICK (Green Lantern, Pedro and Me, Green Arrow)
This is the compilation of the 5 issue series featuring interiors and covers by Geoff Shaw (Buzzkill).

Includes bonus materials on the making of the comic.

Geoff Shaw was born and raised in Mt. Vernon, Iowa and received his Bachelors in fine arts from the University of New Mexico in 2007 and a Masters in Sequential Art from The Savannah College of Art and Design in 2011. During graduate school, he worked on several professional projects including: the Batman annual 2011 and Grim Fairy tales Hook' #5. After placing in the Walt Disney Imaginations' competition, he recieved an internship in Los Angeles. In Imagineering he worked on projects ranging from concept design to line art for Disney's mobile app comic "Habit Heroes", before leaving to persue work in comics. His prior works include pencil art for Pacific Rim: Tales from Year Zero, line art on the four issue mini-series 'Buzzkill' with writer Donny Cates.