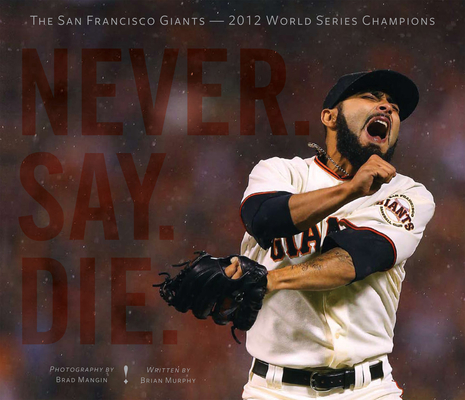 The San Francisco Giants won the World Series in 2012, their second championship in two years. Acclaimed Sports Illustrated and Major League Baseball photographer Brad Mangin has captured this historic season with breathtaking photographs that evoke the Giants' relentless spirit of passion and persistence in 2012. Brian Murphy, beloved Bay Area sports radio personality, tells the story of the Giants' championship season in great detail, highlighting this never-say-die attitude that empowered the Giants to overcome adversity throughout the regular and postseason and ultimately led them to an epic four-game sweep of the Detroit Tigers in the World Series. Never. Say. Die. is truly an art book in form and in function. Featuring over 125 awe-inspiring photographs, this book provides a rare view of one team's championship season seen through the lens of one photographer, Brad Mangin, resulting in a beautiful baseball photo monograph that San Francisco Giants' fans and baseball fans around the world are sure to relish. The book's design and format go above and beyond the typical sports photo book, emphasizing the grit and edge of the Giants' character throughout the season. As a result, Never. Say. Die. stands out uniquely among others in the field.

Brad Mangin is a photographer who, since 1987, has captured the biggest stars in professional sports and regularly shoots for Sports Illustrated and Major League Baseball. Brian Murphy, a former sportswriter for the San Francisco Chronicle and the author of six books, is a sports radio show host for KNBR. Both reside in the San Francisco Bay Area.
Loading...
or support indie stores by buying on