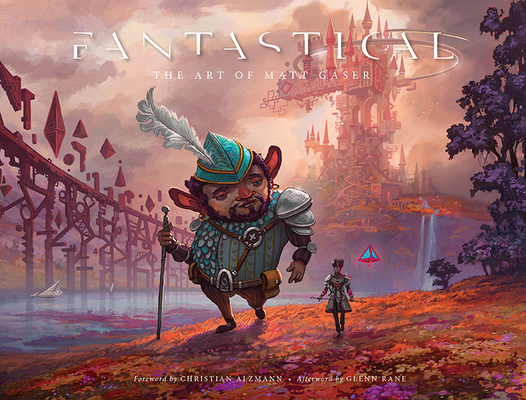 The Art of Matt Gaser

Worlds Beyond Imagination. A utopian city levitates above a lush green Earth. A brilliant doctor specializing in the care and treatment of half-giants and pirate slugs discovers a terrible plague from another dimension. A headstrong teenage girl and her friendly monster enter a high-stakes race for survival. In a bleak and gray dystopian city, a singular butterfly heralds miraculous discoveries for a half-human cyborg. This is just a small sampling of the fantastical worlds imagined by visionary artist Matt Gaser. In this collection of paintings, sketches, and concept art, he will lead you on a journey to realms unlike anything you've ever seen in your wildest imaginings. Pack your bags, it's going to be an incredible ride.

Matt Gaser is a Spectrum Award-winning illustrator/ visual development artist living in Northern California. He began his studies learning Illustration and Entertainment Design at Art Center College of Design in Pasadena. After graduation he worked in video games for six years doing concept design on such PS2 titles as Eragon and Lord of the Rings: The Two Towers. The games industry eventually led him to an amazing opportunity working for Lucasfilm on the CG animated TV series Star Wars: The Clone Wars as a lighting concept artist. After Lucasfilm, he decided to shift gears and embarked on working for himself out of his studio. Some of the projects he's been designing for in recent years include Green Lantern: The Animated Series, the feature film HOP, and a new animated movie currently in development through Sony Pictures Animation and Rovio Animation. His passion for making books has also led him to a two-book deal with Chronicle Books, developing a fantasy adventure series marketed towards children and young adults. Matt continues to live and work for himself in Petaluma, CA. After graduating from The Art Center in Pasadena Christian Alzmann was hired into Industrial Light & Magic's art department. 16 years later, he is still with ILM and now a Senior Art Director. He has worked on numerous film projects including A.I., Men in Black 2, Pirates of the Caribbean, Star Wars Episode Two: Attack of the Clones, War of the Worlds, the fourth installment of Indiana Jones, Transformers and Star Trek 2. Christian is currently working on Star Wars Episode 7: The Force Awakens. As a visual storyteller Christian has also illustrated book covers for Science Fiction and Fantasy novels. His clients include Harper Collins, Penguin Books, IDG and Future Publishing. Christian's artwork has been featured in "Star Wars Mythmaking: Behind the Scenes of Attack of the Clones," "Van Helsing: The Making of the Legend," "Inside Men in Black II," "Exposé" and "Spectrum" 9-16. Christian resides in San Rafael, CA. Glenn Rane is a concept artist and illustrator who has worked in the video game industry for nearly 15 years. As one of the key artists at Blizzard Entertainment, Glenn creates concept art and high profile illustrations for the Warcraft, Starcraft, and Diablo franchises. Glenn resides in Irvine, CA.
or
Not Currently Available for Direct Purchase
Copyright © 2020 American Booksellers Association