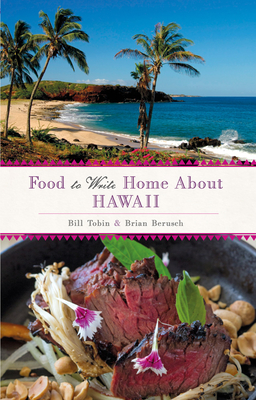 Food to Write Home About... (Hardcover)

Hawaii restaurateur Bill Tobin tells the story of his love affair with Hawaiian cuisine, and all the nuances associated with Hawaiian fare. He does so through a series of affectionate letters to his mother, in their Midwest USA farm town. Through these highly personal letters, Tobin and author Brian Berusch explore every ingredient, dish and the chefs behind them, which about-faced Tobin's vocation into a career "Foodist" on the islands, including a stint as the president of the Hawaii Restaurant Association. Through each chapter we see the evolution of Tobin's palate, right through to the meeting of his wife and the start of his own family, whom are still highly immersed in the food arts there.

Bill Tobin grew up in a small farming community in Nebraska. After a stint in the U.S. Army prior he moved to Hawaii to attain a Business Administration degree. After founding his own restaurant company, he went on to be the Managing Partner and CEO of Tiki's Grill and Bar LLC as well as chairman of the Hawaii Restaurant Association and technical advisor to Running a Bar for Dummies published by Wiley and Sons, Inc. He lives on Honolulu. Brian Berusch has directed and edited various national lifestyle magazines, as well as written articles for more than two dozen titles, including Town & Country, Saveur, Wine Enthusiast and Departures. He has appeared on The Today Show as a travel and food expert. Berusch's first book was a private memoir for Aniello Lauro, celebrated hotelier of the famed Splendid Royale in Lugano, Switzerland. He lives on Honolulu.
or support indie stores by buying on
(This book is on backorder)
Copyright © 2020 American Booksellers Association