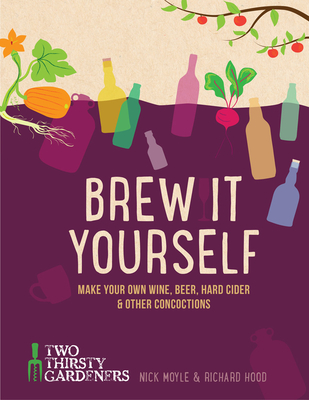 Brew It Yourself (Paperback)

Make Your Own Wine, Beer, Cider & Other Concoctions

The Two Thirsty Gardeners show that brewing your own delicious alcoholic drinks can be surprisingly quick, easy and inexpensive, Brew It Yourself is a collection of more than 75 home brewing recipes, sure to put a fizz back into this popular pastime by adding a modern twist to some old favorites and introducing whole new range of drinks to tantalize the taste buds. Taking their two great loves - alcohol and gardening - Nick Hood and Richard Moyle provide home brewing recipes to inspire you to turn a surplus harvest, a visit to a fruit farm or a delivery from a supermarket into a fantastic variety of drinks. With drinks ranging from a classic elderflower sparkle to homemade absinthe, Richard and Nick bring the art of home brewing back to earth. They'll tell you how to turn surplus fruit harvests into amazing wines and liqueurs; introduce you to the ancient arts of mead and cider making; guide you through some easy beer recipes, from hop packed IPAs to a striking Viking ale; use surprising ingredients such as lavender and nettles for some fun sparkling drink recipes; and take you on a world booze cruise that includes a Mexican pineapple tepache, Scandinavian mulled glogg and Finnish lemon sima. Brew It Yourself also debunks the myths around home brewing, celebrates experimentation and takes the fear out of the science of fermentation. It proves that creating your own tasty alcoholic drinks doesn't need to be complicated, doesn't need to be costly and, most importantly, can be a whole lot of fun!

Nick Moyle and Richard Hood are co-authors of Brew It Yourself and run the popular digging and swigging website 'Two Thirsty Gardeners'. They have written about alcohol and gardening for various newspapers and magazines including regular contributions for the Independent, Somerset Life and Ferment Magazine. Their home brewing antics have led to drink-making demonstrations at the RHS Harvest Festival and the Great Bath Feast and they are already booked for Hampton Court and Craft Beer Rising in 2016. They have appeared on The Alan Titchmarsh Show and BBC Radio and as 'home brew experts' in The Telegraph. They are both members of the British Guild of Beer Writers.
or
Not Currently Available for Direct Purchase
Copyright © 2020 American Booksellers Association