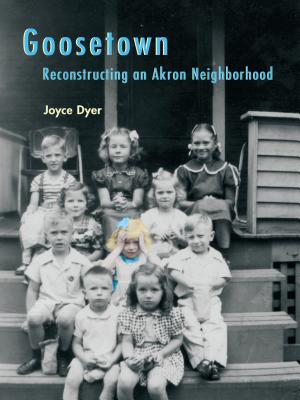 Can the past be discovered? Are memories only someone else's recollections? Can we draw out the shadows deep within the crevices of the brain? Goosetown, once a physical location in Akron, Ohio, and a place in Joyce Dyer's childhood world, still lingers on the edge of the author's perception. Dyer lived her first five years, the most significant five some would say, in Goosetown, and had dismissed them as irrelevant because she couldn't recover the images. Years later, accompanied by her uncle, the self-proclaimed Mayor of Goosetown, the odd couple travels to unearth the lost years. Together they search for signs and symbols to jar recollections. Dyer weaves her story from the traces that remain: memories of relatives, public records, letters, and diaries. Facing a present with streets and buildings that have disappeared with urban progress, can Dyer ever find her real home? Take a ride with the Mayor of Goosetown. You'll enjoy the scenery.

Joyce Dyer is director of the Lindsay-Crane Center for Writing and Literature at Hiram College in Hiram, Ohio, and John S. Kenyon Professor of English. She is the author of three books, The Awakening: A Novel of Beginnings, In a Tangled Wood: An Alzheimer's Journey, and Gum-Dipped: A Daughter Remembers Rubber Town, and the editor of Bloodroot: Reflections on Place by Appalachian Women Writers. She has published essays in magazines such as North American Review, cream city review, and High Plains Literary Review. She has won numerous awards for her writing, including the 1998 Appalachian Book of the Year Award and the 2009 David B. Saunders Award in Creative Nonfiction.
Loading...
or
Not Currently Available for Direct Purchase