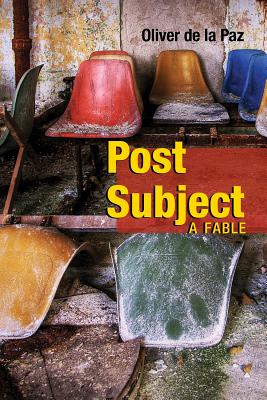 A Fable (Akron Series in Poetry)

Ecstatic and obsessive, the prose poems that make up Oliver de la Paz's Post Subject: A Fable reveal the monuments of a lost country. Through a series of epistles addressed to "Empire" a catalog emerges, where what can be tallied is noted in a ledger, what can be claimed is demarcated, and what has been reaped is elided. The task of deposing the late century is taken up. What's salvaged from the remains is humanity.

Oliver de la Paz is the author of four books of poetry: Names Above Houses, Furious Lullaby, Requiem for the Orchard, and Post Subject: A Fable. He is the coeditor of A Face to Meet the Faces: An Anthology of Contemporary Persona Poems and the co-chair of Kundiman.org's advisory board. He teaches creative writing in the MFA program at Western Washington University.
Loading...
or
Not Currently Available for Direct Purchase