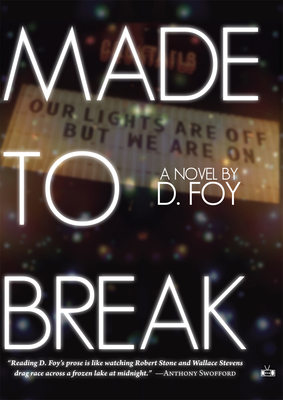 * One of the best books of 2014 --Flavorwire, Entropy Magazine
Two days before New Years, a pack of five friends--three men and two women--head to a remote cabin near Lake Tahoe to celebrate the holidays. They've been buddies forever, banded together by scrapes and squalor, their relationships defined by these wild times.

After a car accident leaves one friend sick and dying, and severe weather traps them at the cabin, there is nowhere to go, forcing them to finally and ultimately take stock and confront their past transgressions, considering what they mean to one another and themselves.

With some of the most luminous and purple prose flexed in recent memory, D. Foy is an incendiary new voice and Made to Break, a grand, episodic debut, redolent of the stark conscience of Denis Johnson and the spellbinding vision of Roberto Bola o.

Made to Break, D. Foy's debut novel, snaps. Literary, cinematic... Foy] is a writing school of one, and Made to Break ushers his literary energies into categorical existence. --The Daily Beast

D. FOY has had work published or forthcoming in Bomb, Frequencies: Volume 3, Post Road, The Literary Review, and The Georgia Review. His story, Barnacles of the Fuzz, appeared in Forty New Stories: New Writing from Harper Perennial, edited by Cal Morgan. An essay on the American laundromat will appear in Snorri Bros.'s Laundromat, an homage in photographs to laundromats throughout New York City, available from powerHouse Books.
Loading...
or
Not Currently Available for Direct Purchase