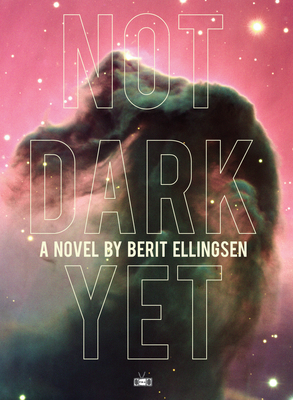 Not Dark Yet (Paperback)

*Favorite books of 2015 --Electric Literature
"Fascinating, surreal, gorgeously written, and like nothing you've ever read before, Not Dark Yet is the book we all need to read right now. It is art about science, climate change, and activism, and it vitally explores how we as people deal with a world that is transforming in terrifying ways."
--BuzzFeed

Brandon leaves his boyfriend in the city for a quiet life in the mountains after an affair with a professor ends with Brandon being forced to kill a research animal. It is a violent, unfortunate episode that conjures memories from his military background.
In the mountains, his new neighbors are using the increased temperatures to stage an ambitious agricultural project in an effort to combat globally heightened food prices and shortages. Brandon gets swept along with their optimism, while simultaneously applying to a new astronaut training program. However, he learns that these changes--internal, external--are irreversible.
A sublime love story coupled with the universal struggle for personal understanding, Not Dark Yet is an informed novel of consequences with an ever-tightening emotional grip on the reader.

Berit Ellingsen is a Korean-Norwegian writer whose novel Not Dark Yet was published by Two Dollar Radio in November 2015. She is the author of the short story collections the Liquid Skin and Vessel & Solsvart, and the novel Une Ville Vide (PublieMonde). Her work has appeared in W.W. Norton's Flash Fiction International, SmokeLong Quarterly, Unstuck, Litro, Up Here - The North at the Center of the World, and other places, and been nominated for the Pushcart Prize, Best of the Net, and the British Science Fiction Award. Berit is a member of the Norwegian Author's Union and divides her time between Norway and the polar regions.
or
Not Currently Available for Direct Purchase
Copyright © 2020 American Booksellers Association